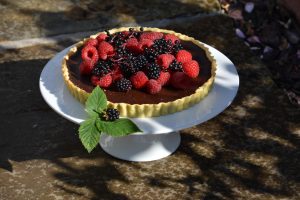 The Clocks go back and the early nights arrive!

What a worthy winner - Nadiya

I think I would like to describe this week as sort of “reflective” !

I have mentioned in many interviews and magazine and press articles that my grandmother was my inspiration for my love of cooking and baking.  She certainly was.  I think it is not until you get older that you dwell more on such things and realise how much time and effort she put into my learning.  As well as cooking skills, she could also knit, sew and crochet.  Skills I have attained without really remembering when.

She never knew her father.  She was born in 1914 and he went off to fight and like so many like him, he never came back.  I remember as a child, every remembrance Sunday having to sit through the Remembrance Day Ceremony on the television and absolutely hating it because she used to get upset.  Not in a wailing kind of way – just a quiet, solemn way.  As a result I find November 11th really difficult and sometimes, I am ashamed to say, actually try to pretend it isn’t happening.

However, we now acknowledge that 100 years have passed since those awful times. My grandmother always said she wanted to go to France to try and find out where her father fell but of course never got round to it.  My husband Tim though loves to research such events and spent some time finding out where the West Riding Regiment was fighting and where his grave might be. Unfortunately, he had no grave but his name is listed on the Arras Memorial.

This week took me over to the Lake District to Ulverston and a talk to some 200 members of the U3A (University of the Third Age) for those readers unfamiliar – don’t worry I didn’t know either !  They were a great crowd – all over 50 but full of life, enthusiasm and interest in my Bake Off story.

Anyway, going over there meant I was going to almost pass the door of my grandmother’s childhood stomping ground. She lived in the West Riding of Yorkshire, Bingley to be precise .  Tim had discovered that Harry Farrar (my great grandfather) had died on the 10th May 1917. We took a detour and visited the Bankfield Museum, a museum in Halifax which is the home to thearchives of the West Riding Regiment,  they also have a whole floor dedicated to the First World War.  The staff there couldn’t do enough for us.  A helpful chap took his time and then presented us with maps, diary notes and very specific information about his last hours.  Amazing !

I often wish my grandmother (Nana) was still here to see the fruits of her labours.  Her grand daughter won Bake Off and continues to apply all those basic techniques and tips passed on all those years ago and her father sadly was killed simply travelling from a reserve trench to a front line trench in the dead of night in northern France along with many many others.

Talk next week folks – going to tune into Countryfile now !  The recipe for the Chocolate and Liquorice tart is here :-https://www.nancybirtwhistle.co.uk/recipes/chocolate-and-liquorice-tart