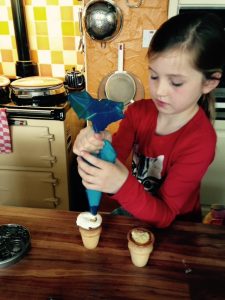 The school holidays are drawing to a close and when my children were small, by this time I was counting the days until the school gates opened again.

I have been engaged with childcare this weekend as the owners have been at a wedding. One grand daughter is seven and the other one only two. They have been highly amused because we took cardboard boxes then picked runner beans, French beans and courgettes – placed them in the boxes and left them outside the front gate with a note for people to “help themselves”.  The girls’ job then was to periodically visit the boxes to see how many had been taken.  There were squeals of delight when the vegetables were disappearing but they didn’t see who took them.

That kept them amused for a short while anyway !

As is usual in my kitchen we decided to bake !  When you have children in the home growing up you learn to keep dangerous things out of reach and not have delicate ornaments or pale cream carpets etc etc. – it’s a way of life.  However, when they grow up this awareness lapses and when they finally leave you have chance to smarten up the home.  I have to say keeping things childproof becomes a thing of the past until grandchildren arrive.

About six years ago I remember going to a BBC good food show and been totally sold on a piece of kit being demonstrated and on sale there called a Bamix.  I had to have one !  This beast of a kitchen tool could blast a pan of vegetables to a pulp in seconds, make hollandaise sauce and even whisk milk into a thick whipped dessert topping.  I bought myself this marvellous hand blender along with its stand and various clip on attachments and it took pride of place on my kitchen worktop.

My grandson who was two at the time was under my care for the day.  We baked some fairy buns and then we quickly made icing to put over the top.  This was just a very simple icing – icing sugar, a little food colouring and lemon juice.  Trouble was I didn’t sieve the icing sugar and I had lumps that I couldn’t get rid of so I thought – aha – my Bamix can do this job.  It can blast lumps out of custards and sauces so it will be able to do the same with this icing.

Quickly, back over to the buns and spread this lovely smooth icing over – then the phone rings.

I go over to the phone – can’t even remember who it was – phone was dropped !  Sheer panic resulted as over at the corner of the kitchen was my grandson, with his stool – at the worktop with Bamix in mouth !!!  For a split second I froze as the horror of what might happen paralysed my senses.  Then I ran over to the child but more importantly turned off the Bamix at the mains.  Even now when I think of what might have been – how could I have lived with myself ?  The child probably would have lost his tongue and severely damaged his mouth if his little fingers had hit on the start button at the side.

Safety in the kitchen is so important.  Knives are an obvious hazard and I never leave them in a bowl of water.  I wash and dry them immediately.  Hot pans with handles sticking out – again I always keep them away from children.  The Bamix still terrifies me and immediately I have used it I always  unplug it from the mains.

I am certainly more mindful now about safety in the home than I ever was when my children were growing up.  I think as a grandparent one is more tolerant and allows the children to get involved because you realise childhood years are short.  Perhaps when your own children are growing up you boot them out of the kitchen more because you need to get on.

This weekend we made piñata cup cones.  So simple and the children really do like to hide the sweets inside and then practise their piping skills.  Have a go – have a last blast before they go back to school.

Thoroughly enjoying Bake Off by the way – who do you reckon will win ?  Too early to tell I think but there is some serious skill in the tent this year.

Next week is Alternative ingredients which should be really interesting.

Have a good week readers and thank you x