Blog Post
Several demonstrations in the next few weeks 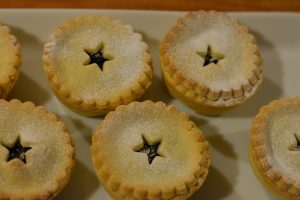 Exhausted after a busy weekend

The Shops are telling us Christmas is just around the corner

Good morning readers ! – I am late with my writing this week.  Its already Monday morning and blog post not yet written.  I have a good excuse though – I fed the family yesterday !  It is a marathon of cooking for 15 people.  I cooked roast chicken or should I say chickens ! because one certainly is not enough for our hungry family.  They are great recipe tasters and certainly tell me straight if something hits the spot (or doesn’t ! ).

It was a nice afternoon with them and it is always hectic because young children make it so but I wouldn’t change it for the world.  As a parent I remember thinking those sometimes difficult times would last forever – but then all of a sudden they are grown up with families of their own.

Talking of time passing – it is now almost a year to the day since I did my first baking demonstration.  I had been invited to the local Lincolnshire Show Ground to their Christmas Fayre and so decided to demonstrate my own mince pies and mincemeat.  I promise you these are the best mince pies ever and as long as you handle the pastry carefully and respect its delicate disposition you will be fine.  Here is the link to the recipe :-https://www.nancybirtwhistle.co.uk/recipes/mince-pies

Anyway back to the demonstration.  I arrived at the venue and was shown my spot.  There was a sort of kitchen at the back with sinks and tables for prepping with various other people who were assisting  chefs in their preparations or running around.  There was a man with a sound system trying out the electrics.  Then there was a curtain at the far end and beyond that a stage and seating for the audience.  I was told there was seating for about 100 which seemed a lot to me – and I had half an hour to go.

I remember unpacking my bag of its ingredients feeling very nervous indeed.  Suddenly I realised I had forgotten my saucepan !  Essential for the mincemeat.  I frantically beckoned the attention of one of the organisers who said she would go and get one from the main kitchen.  Phew, problem solved I thought but in the meantime Tim had already taken himself off – how annoying.  He was nowhere to be seen and so I continued to try to organise myself in the limited space available.  I then met a lovely young man called Ben.  Ben was 16 or 17 in years and had been assigned as my “assistant” during the demo.  He was in fact the son of the main organiser and had been given the responsibility.  He was great initially, I explained how I wanted things set out on the stage, what I wanted him to do and when etc.  He said he was nervous but I told him all would be fine.  He was not expected to speak or move just to stir the fruit in a pan.  Good.  All set then.  The demo was at midday and at 11.50 Ben went on stage to place all my equipment.  That done he came back to me and he looked dreadful.  He was pale, sweating and shaking. “I can’t to it” – he said.  “The place is rammed with people and I just cannot do it”.  To add further pressure, the organiser came back from the kitchen with the pan.  The pan was catering size and my mincemeat would not have covered the bottom !   Deep breaths were needed now – pan not suitable, assistant a jibbering wreck and five minutes to go !

An even younger lad who was busy washing up turned to me and said in a quiet voice “I’ll do it Nancy !”   No chance for him to change his mind I asked him to get himself on stage and I would talk him through everything.  Then just before I was due to go on stage, Tim appeared – with a brand new pan !  He had been down to the local supermarket and picked up a perfect sized pan for the demo.

I walked on stage and could not believe the crowd.  Not only were all the seats taken but there were people standing as far as the eye could see . It was amazing but looking back that demonstration was not my best but we have to start somewhere.    Demonstrating and public speaking is something I do quite regularly now in fact I have been invited to demonstrate the mincemeat at a charity carol concert this year – that’s a new one on me !

Have a good week readers and if you are at the Cake and Bake Manchester on Sunday 15th November come and have a chat.