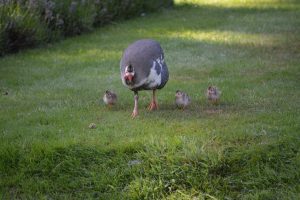 When should we interfere with nature ?

Oh my word – this last week has been so traumatic !  You may remember me proudly announcing that my guinea fowl had decided to nest this year.  Problem was they had decided to do it across the road (which is quite a busy road by the way !).  The male continued to roost in the tree each night but the female sat faithfully on 21 eggs for four weeks exactly.

We were in France until last Tuesday but my neighbour contacted me to say the chicks had hatched on Sunday and on Monday she decided to leave the nest with her new family and walk back across the road to our garden.  A neighbour told us he saw the bird and her brood start the journey back home so he stopped the traffic ! He then followed them across the road and had to lift the little ones over the kerb because they couldn’t manage it themselves.

We arrived home Tuesday night quite late – it was dark at any rate and obviously there was no sign of the birds or their young.  The next morning we were delighted to see both parents and 11 babies happily pecking around the lawn, sitting in the sunshine – it was an absolute delight to see.  As dark approached, once again the birds disappeared though the male parted company and roosted in his usual tree.

Absolute chaos erupted at 5 am the next morning (Thursday)  – the birds made an almighty racket.  We shot out of bed, ran downstairs to see both parents in a tree and no sign of little ones.  There is no doubt the fox had sniffed the female out and we thought had taken the chicks.  However, after an hour or so, all went quiet, the adults came out of the tree and seven little ones appeared.  The next day was peaceful enough, both parents busily grooming themselves, little chicks staying close by – our dogs in the vicinity so the magpies which had also been a pest to these birds were kept at bay.

The following night – usual situation, dad went off to roost, mother and children found a hiding place for the night.  I found myself totally preoccupied by these birds, partly I think because anyone I know who has had guinea fowl has never had them nesting and also the determination of the mother to sit for 28 days, sometimes with the rain lashing down over her.  I recall one night when it rained so heavily through the night that it woke me up and all I could think about was this poor bird sitting on her eggs.  Tim reminded me that all birds live outside anyway but somehow I had such admiration for this lady.

I decided to get up at 5am and do a walk of the garden to put off the fox in case he was planning a visit. I was content that all was quiet so I crept back to bed.

The next morning was so so very sad.  There was no noise – nothing.  Then I saw dad walking around the garden calling and looking for his mate.  She was gone.  Amongst the shrubbery was a pile of grey feathers, a few squashed plants but nothing else. The fox had been and killed mother and 4 young.

I was actually very near to tears.  I know its nature and every being has its enemies but why do people encourage foxes ?  Urban foxes are now so brave and can even be seen during the day sculking around.  They also kill for killing’s sake – our butcher tells me he had a chicken shed with 100 birds.  The fox came in one night and killed the lot – taking the heads from the bodies then fleeing.

Anyway – just before the tears started to flow, out of the undergrowth appeared three little chicks.  Absolute delight only the problem was it had started to rain and the forecast stated the rain would get heavier and last all day and through the night.  These little chicks would get wet, then cold and die.  What to do ?

Dad kept his remaining family close by, sitting over them to protect them from the wet.  I honestly thought he would clear off to pastures new but he realised he had a job to do and owed it to his mate to look after what was left.

Anyway by Friday afternoon – soaking wet and I think at the end of his tether – he came to the house.  He is not in the least bit afraid of humans or our dogs.  I had a bit of a chat with him and decided we should try to get him into the turkey run (turkeys not arrived yet ! – thank goodness) and into the shed there.

We walked him and the three little ones to the shed.  The male went in and we lifted the little ones in.  I added bedding, food and water and that was it for the night.

The next day all was good until about midday.  Dad decided to fly out of the run leaving the little ones.  They frantically ran up and down the fence trying to find a way out.  He was calling them all the time.  What should we do ?  Do we let dad have his way or do we interfere and hand raise these chicks ?

I had a conversation with a farmer friend I know who said that if you try and hand rear them there is a chance they won’t learn to roost in the trees as they grow up.

We decided dad should have his young and as I am writing he is happily trotting around the garden, three kids in tow.  Our plan is to try to get them back into the shed at night.  I think that’s a good compromise.

Back to bake off – I was inspired to make biscotti this week, no surprise there.  I expect many people have done the same.  I decided on three favourite flavours of mine –  cherry, chocolate and hazelnut – they all go together but have never had them in a biscuit.  I think they work really well – they’ve all been eaten anyway. Biscotti are fat free too – have a go !   talk next week.