I used to believe that souffles were dangerous things to make because they had to be served immediately, could sink and were an awful lot of effort – how wrong I was !! These individual souffles are made in advance, can be chilled, even frozen and reheated when required – they are packed with flavour, light and perfect for a light lunch or starter when you want to show off to your friends. Use cornflour in place of the plain flour and your recipe is gluten free !! 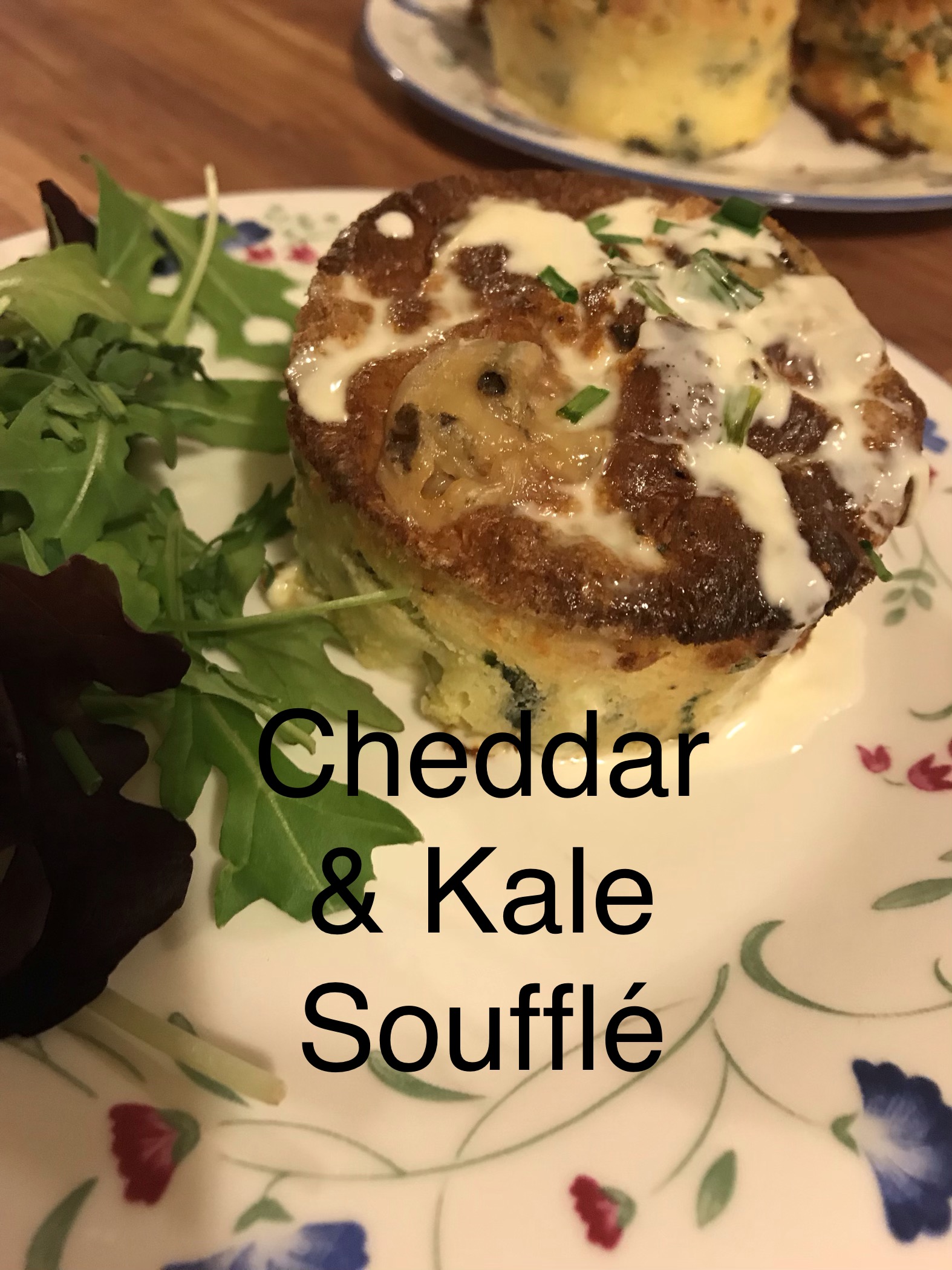 You will need 6 x ramekin dishes – mine measure 7.5cm in diameter x 4cm deep and grease them well with my lining paste. You will also need a roasting tin which will fit your six ramekins plus a baking sheet lined with baking parchment.

3 tbsp finely chopped chivest to show off to your friends. Use cornflour in place of the plain flour and your recipe is gluten free !!

Start by boiling the kale. After stripping the kale of any stalks boil in a little salted water until tender then drain.  Take then a double thickness piece of kitchen paper and wrap the kale in a parcel and set aside.  The kale needs to be dried off and cold.

Boil a kettle full of water.

In a small saucepan heat the milk, bay leaf, onion, peppercorns and nutmeg to simmering then remove from the heat and strain the seasoned milk into a jug. Discard the onion etc.

In a roomy saucepan melt the butter over a medium heat then stir in the flour. Keep stirring with a whisk for a minute until a thick paste forms and starts to bubble slightly then add the seasoned milk little by little, whisking well between each addition until you have a thick smooth sauce.  Take from the heat, stir regularly and when it has cooled slightly add the egg yolks, one at a time. Add then the grated cheese and the cooled kale, tearing any large leaves into small pieces.

In another bowl then whisk up the egg whites until soft peaks are formed. Take a large spoonful of whisked egg white and fold into the main mix to loosen it slightly before transferring the rest of the egg white into the main mix and folding in well.  Give a good seasoning then divide between the 6 prepared ramekins.  Fill the ramekins right to the top.

Transfer the ramekins to the roasting tin and pour the recently boiled water into the tin allowing it to come about half way up the ramekin dishes. Transfer to the preheated oven and bake for 20 minutes until the souffles are risen and golden.

Take from the oven and immediately remove them from the water bath and place onto cooling trays and leave to go completely cold. The souffles will have lost their rise but don’t worry it will come back when they are reheated !

Take a knife and run it around the edge of the ramekin dish before turning the soufflé out and place onto the baking sheet. The souffles can now be chilled for up to 24 hours or frozen.

When ready to complete the cooking – top off the souffles with the cubed cheese then pop into a preheated oven at 200 degrees c for 25 minutes (35 from frozen). Five minutes from the end of the cooking time quickly remove them from the oven and pour 2 tbsp double cream over each soufflé along with a scattering of chives – quickly pop them back into the oven to finish cooking.

This website uses cookies to improve your experience while you navigate through the website. Out of these, the cookies that are categorized as necessary are stored on your browser as they are essential for the working of basic functionalities of the website. We also use third-party cookies that help us analyze and understand how you use this website. These cookies will be stored in your browser only with your consent. You also have the option to opt-out of these cookies. But opting out of some of these cookies may affect your browsing experience.
Necessary Always Enabled

Any cookies that may not be particularly necessary for the website to function and is used specifically to collect user personal data via analytics, ads, other embedded contents are termed as non-necessary cookies. It is mandatory to procure user consent prior to running these cookies on your website.