A very simple cake and the “spiders” appeal very much to children.  They are made from rice krispies, marshmallows and chocolate !  A sort of toffee crisp.  The spider legs are liquorice so everything is edible.  The cobweb cake is chocolate and orange and the whole thing is fun and very easy. 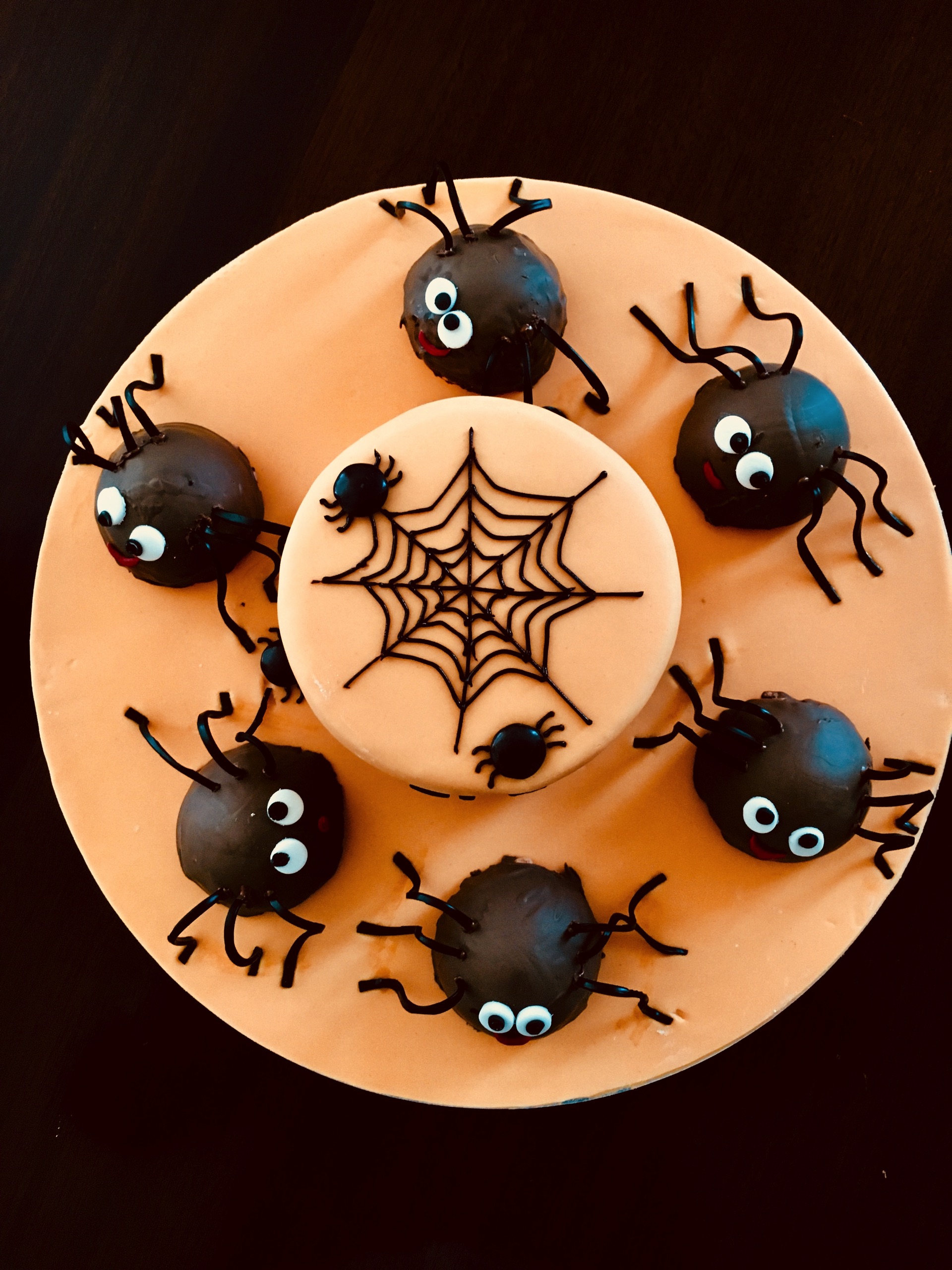 You will need 2 x 6inch cake tins greased and base lined and six to eight teacake moulds.

1 kg Fondant along with red, yellow, red and black colours

Cream together the margarine and sugar until light and fluffy then add the eggs one at a time, whisking well between each addition.  In a separate bowl mix together the cocoa, vanilla and milk and make sure it is smooth.  Chop the chocolate in a food processor to a fine crumb or melt it in the microwave or in a bowl over a pan of hot water.  If you melt the chocolate allow it to cool down before adding to the cake mix.  Fold into the cake the flour, chocolate crumb/melted cooled chocolate and cocoa paste and mix together well until the whole mixture is well combined.  Divide between the two baking tins and bake for 20 minutes at 180°C fan (200°C non-fan,  Gas Mark 6, 400°F).  Leave to cool slightly in their tins then turn out onto cooling racks.

Simply whisk the butter until creamy then gradually add the icing sugar whisking well between each addition.  Add the vanilla and orange zest then finally whisk in, a spoonful at a time the cream cheese.

Fill the cakes with buttercream and crumb coat the top and sides then chill until ready to apply the fondant.

To make the spiders

Melt the butter in a medium saucepan then add the marshmallows which will begin to dissolve in the heat.  Once you have a thick liquid add in the rice krispies and stir well.  Finally stir in the chocolate chips.

Divide between the teacake moulds then when the mixture has cooled slightly press it firmly into the moulds using your fingers.  Leave in the fridge to set.

Melt the milk chocolate in a bowl over a pan of barely simmering water and when liquid turn the krispie buns out onto a cooling rack set over a piece of paper or foil to catch the drips.  Coat the krispies in chocolate then leave to set.

Set the cake on the board then pip a web over.

To assemble the spiders – after adding the eyes and mouth then set onto the board.  I used liquorice catherine wheels, cut in half lengthways and then secured them onto the spider body using a blob of melted chocolate and onto the cake board using just water.  Leave everything to set completely.