HOW TO VIDEO : https://youtu.be/Ck3boHoZJ2M This delicious traditional Christmas pudding is sufficient to fill a large 2lb pudding basin,  2 x 1lb or 9 single serve puddings steamed in small pudding tins (150ml) or ramekin dishes.  They make good presents! Once cooked it will keep for a very long time – in fact if you make two you can have one this Christmas and one next Christmas ! I have added a bit of a twist and included glace Morello cherries and cardamom seeds which provide some extra fruity flavour. As we know it is a firm tradition that on Stir up Sunday (the last Sunday before Advent) we make the pudding. Each family member gives the pudding a stir, closes their eyes and makes a wish.  I hope that for everyone who makes this pudding their wish comes true. 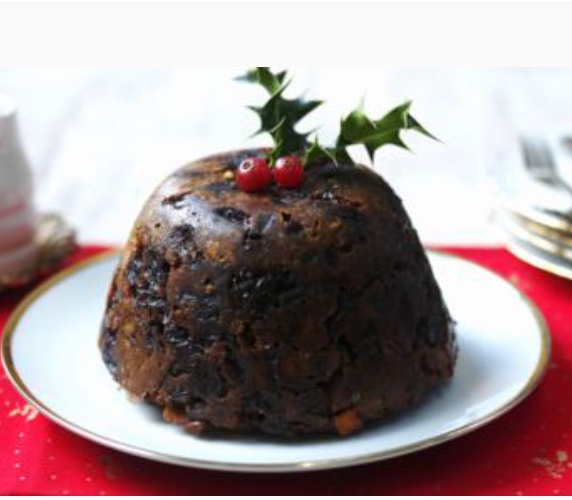 Zests and juices of 1 orange and 1 lemon

2 tbsp Cointreau or brandy (for alcohol free use 2 tbsp. Cranberry and Elderflower Cordial)

The main drawback with making your own traditional Christmas Pudding is that it has to steam over a pan of boiling water for some 6 to 8 hours ! Apart from the obvious time involved, the fact that you have to keep an eye on things so that the pan doesn’t boil dry not to mention the condensation dripping from the windows is reason enough not to make your own.  However, I have here a solution.  We will steam the pudding overnight or for 10 hours in a pan of simmering water in a very low oven.  It is clean, convenient and it looks after itself.  If you have a slow cooker you can preheat it for an hour, pour in boiling water from the kettle, place your wrapped pudding inside, cover with the lid and slow cook for 10 hours.

Start the morning before and mix all dry ingredients together in a very large mixing bowl. Then add all the fruits.  The apple I didn’t peel but washed then grated straight into the bowl until I got down to the core.  Discard the core.

Mix everything well then incorporate the liquids. Give everything a good stir then cover the surface with a large plate and leave until evening.  The mixture will be quite sloppy and drop easily from a spoon

Following an eight hour soak the mixture will be thick, wholesome and smelling delicious – now it is time to give a good stir and prepare for cooking.

Lightly grease a 2lb, 2 x 1llb or 9 x 150ml pudding basins or ramekins with butter or brush with lining paste. Invite everyone to have a stir (and a wish) before spooning the mix into the basin and smoothing with the back of a spoon.  Cover the basin with a sheet of greaseproof paper making a centre pleat to allow for any expansion then tie off with string.  Cover then with a sheet of kitchen foil securing it around the rim of the basin.

Use a large casserole / stew pan with a trivet in the bottom (if you haven’t a trivet try a metal plate turned upside down). Place the pudding on top then fill with boiling water so that it comes about 1/3rd of the way up the basin. Cover the casserole pan with a lid.

Bring the water to a boil and turn down and simmer for 20 minutes before transferring the casserole to the oven which has been preheated to 100 degrees centigrade.

Steam in the oven for 10 hours or overnight. I usually put mine in the oven at 10pm and bring it out at 8am the next morning (large pudding) Small puddings (1lb) I steam in the oven in the same way for 8 hours. Mini puddings in 150ml tins or dishes take 5 hours.

Alternatively, if you have an electric slow cooker – preheat it for an hour on high then stand the pudding on a metal ring or biscuit cutter and pour in boiling water from the kettle until it comes 1/3rd way up the pudding basin.  Cover with the lid and cook for 10 hours.

If you have a pressure cooker place the pudding(s) on the trivet with 500ml of boiling water.  Steam for 20 minutes then cook under pressure for two hours for small puddings and three hours for a large pudding or the two small puddings.

Leave to cool completely then remove the paper and foil. Place a clean piece of paper and string over the pudding – wrap in foil and leave in a cool dark place until Christmas Day.

The pudding can be reheated by steaming for 2 hours for large puddings and 1 hour for small puddings the same way, ie place in a casserole with boiling water.  Alternatively reheat in the microwave but remember to remove from any metal tin and remove aluminium foil.  Microwave on high for 5 minutes – leave for 10 minutes then microwave again for 3 minutes.  Remove the greaseproof paper and turn out onto a plate and serve with rum sauce or thick cream.

If you want to gift an individual pudding: after cooking leave to go completely cold then tap out of the tin.  If the pudding seems stubborn then dip in hot water for a minute then it will release easily.  Mould a clean piece of aluminium foil around the outside of the tin it was cooked in then use this moulded piece to line the inside of the tin. Pop the cooked pudding inside, lay a clean circle of greaseproof paper over the top then fold the foil over the top. Wrap the securely wrapped pudding in a piece of muslin tied off with string. Don’t forget to add cooking instructions “Steam for one hour” on the gift tag.