I suppose a cottage pie can be knocked up in less than an hour but to produce a cottage pie packed with flavour I think it should be made over two days.  I accept sometimes there is the need to 'get on'  when you need to quickly get a meal onto the table.  However, if you have the time and with a little forward planning make a batch and freeze the surplus.  This quantity will make enough to serve 12 people –  then we have three meals for a family of four. 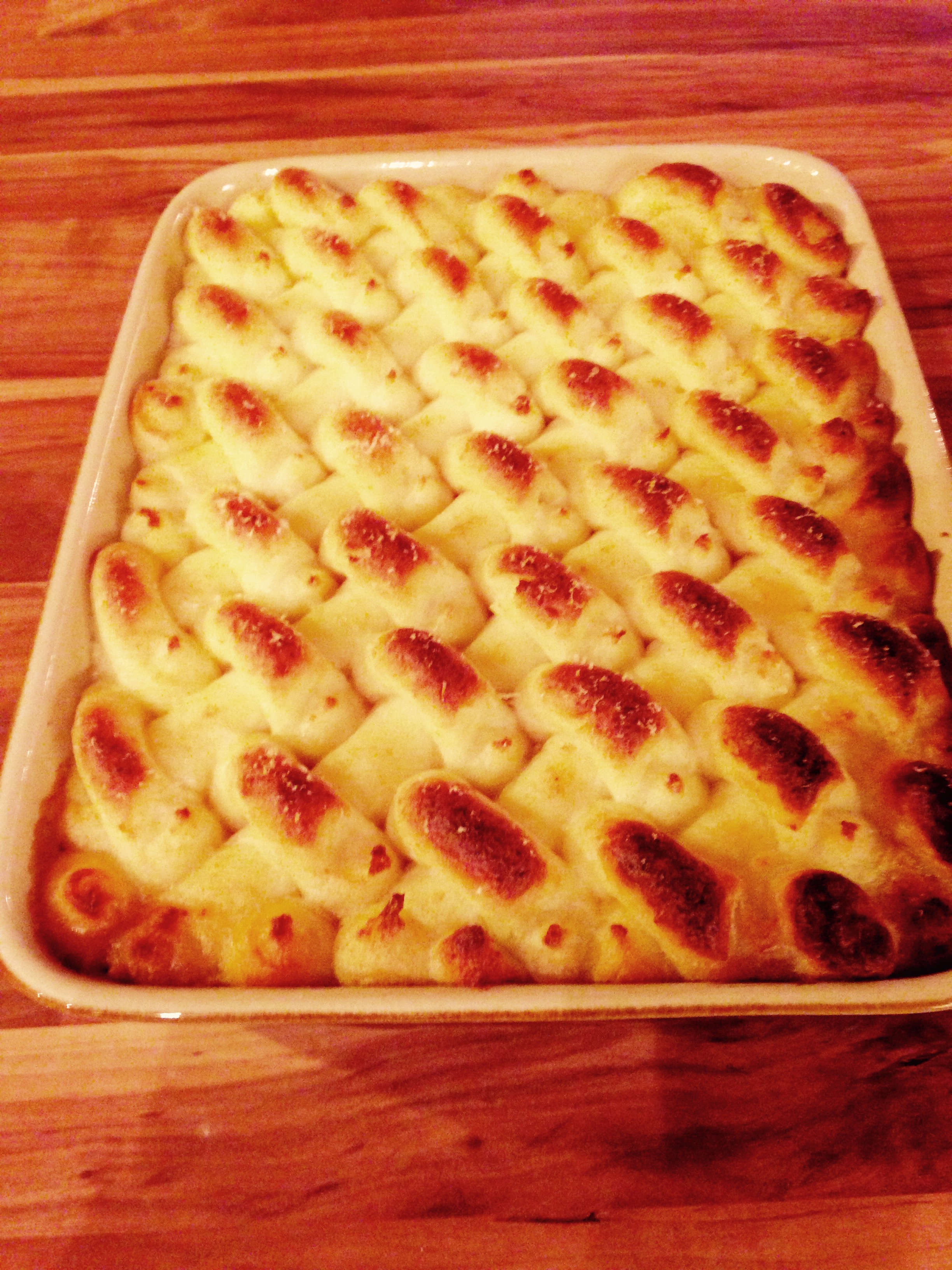 You will need a large oven proof casserole pan with a lid.  You will need dishes in which  to cook the cottage pie – either one large dish measuring 30cm x 30cm and 5 cm deep if you are feeding a crowd or three family sized.

Start by heating the oil in the casserole pan then add the chopped onions and fry over a gently heat until the onion is soft but not coloured.  This will take about 5-6 minutes. Add the bacon and fry for a further 5 minutes then add the chopped carrot and celery.   Give everything a really good stir then add half the parsley chopped small along with the parsley stalks also chopped small (about 3 tbsp – the rest will be added at the end of the cooking).  Give everything a good season of salt and pepper then add the dried herbs.

Turn up the heat then add the minced beef and stir fry it along with the vegetables until the meat starts to colour.

When the meat has taken on a tinged brown colour,  turn the heat down to low then add 2 tbsp rice flour  (or wheat flour), sugar and stir it around to absorb any meat juices then add the red wine and let everything bubble and thicken.  Then add the stock  and water little by little and give everything a good stir.

Bring everything to a gentle simmer on the hob then place a lid on the pan and transfer to the oven (or slow cooker) and simmer low and slow at just 100 degrees for 6-8 hours.

At the end of the cooking time remove the lid. The mixture should be thick but if it is thin turn up the oven temperature to 200 degrees, remove the lid and allow to reduce down for 30 minutes.

Take the meat from the oven, allow to cool slightly then stir in the rest of the chopped fresh parsley.

Now transfer the meat to the dish for the cottage pie and leave to go completely cold.

I then add a layer of finely sliced leeks. Fry these in the sesame oil until just tinged dark brown.  Don’t stir them too often whilst frying – allow the browning to occur.  This only takes about6 minutes then take from the heat and spread in a layer over the meat.

To make the potato topping. Cover the potatoes with water then bring to the boil, add salt and allow to simmer for about 20 minutes until tender.

I like to pass my boiled potatoes through a potato ricer but if you have a standard potato masher then this is fine. Heat the milk and butter together then  gradually pour over the potatoes, mixing between each addition until you have a smooth fluffy mash.  Season with salt and white pepper and taste,

Spoon or pipe the potato onto the chilled meat and leeks and grate over some cheese if you desire.

Bake at 180 degrees for 45 minutes until the potato is golden and delicious.

I serve this pie with oven roasted root veg (cooking on the shelf underneath the cottage pie) and a green vegetable.