I love Crumpets (often referred to as Pikelets in the north of England) - the traditional English breakfast and teatime treat! These soft spongy cakes, crispy on the outside are served warm with butter which readily oozes down the little holes on their cratered surface. Crumpets originated in the 17th Century but were brought up to date in the Victorian era when yeast and bicarbonate of soda were added. Enjoy them simply with butter, add jam, serve with a rasher of bacon or an egg - The possibilities are endless !!! Home made crumpets are lighter and more delicious than many of the rubbery bought versions. 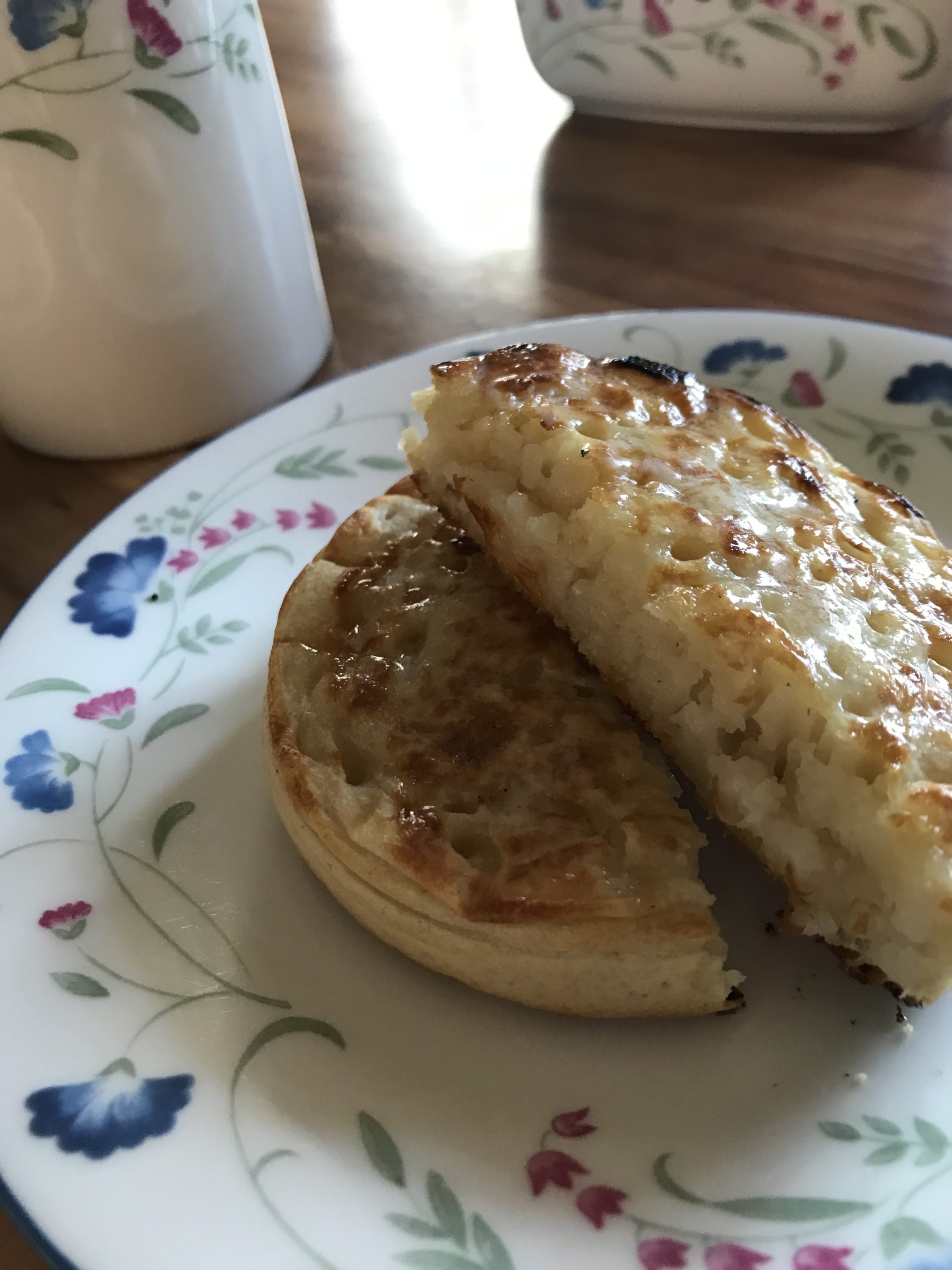 You will need a heavy based frying pan and four crumpet rings – mine measure 3.5 inches or 9cm in diameter. I also used a hand held electric whisk.

Vegetable oil or butter for greasing

Start by warming the milk. I placed my milk in a jug and popped it into the microwave for 40 seconds. The milk needs to feel just warm – not hot. Add the yeast and the sugar, give a stir and leave to stand for about 5 minutes until it starts to form a froth and bubbles on the surface.

In a separate bowl place the flour and salt, stirring to combine then add the yeasted milk – a little at a time until you have a very thick smooth batter. Cover with a shower cap then leave in a warm place until doubled in size. My kitchen is quite cool so I pop the electric oven light on which generates just sufficient heat to help the yeast to grow.

After an hour your batter will have formed bubbles on the surface and will have risen up the bowl. Remove the shower cap and have to hand your jug of warm water. Add the baking powder to the water and mix well. It will fizz a little.
Take an electric hand whisk and start to whisk the risen dough and at the same time add the warm water in a thin steady stream.
You will now have a thin batter which is smooth and the consistency of thick cream. Cover with a shower cap, pop it back into the oven (with just the light on) and leave to rest for 40 minutes.

After the resting time take the heavy bottomed frying pan and rub the base with the oil or butter and grease the crumpet rings.

Place the pan and crumpet rings on a medium heat and allow to heat up gradually. Once the fat is starting to smoke turn the flame down slightly then using a ladle fill each ring about two thirds full with the batter.

I recommend a practise run first – making just one crumpet – so that you understand exactly how hot your pan needs to be. A crumpet will need 12-15 minutes to cook all the way through. If the pan is too hot then the base of your crumpet will burn before the top is cooked.

Throughout the cooking time you will see the little holes start to develop and as the crumpet cooks through it will pop on the surface. All of the batter has to cook through to the top before removing the crumpet rings.

Once you are happy that the top of the crumpets are cooked and there is no wet or sticky batter on the surface then you can carefully remove the rings. They are very hot so use a fork or kitchen tweezers to lift them off.

If you want to eat the crumpets immediately flip them over and brown the tops to deep golden brown. Remove from the pan, butter and serve whilst warm.

If you want to serve your crumpets later then either flip them over for about 30 seconds to 1 minute until the tops are barely tinged with colour or leave them as they are as they will be toasted later. Allow them to cool on a cooling rack. Crumpets will keep in a tin for a day or two or can be frozen at this stage then toasted on both sides once thawed.  Allow about half an hour to thaw at room temperature.