If you grow your own cucumbers then you may be facing a glut. If you haven’t had pickled cucumbers before then try my recipe – you will want to make it every year !! 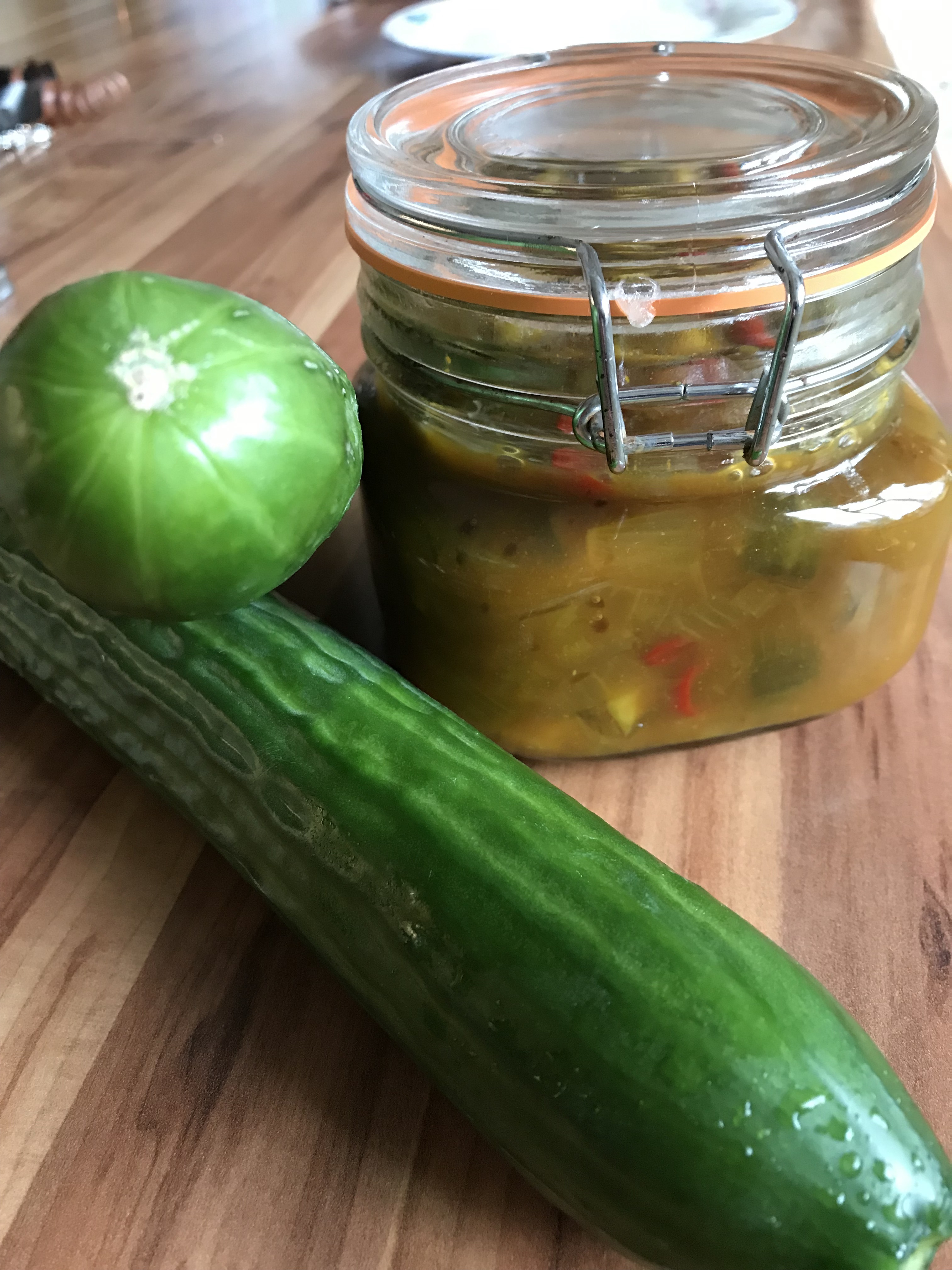 You will need clean sterilised jars. To do this wash your jars thoroughly in hot soapy water, rinse then place in a cold oven. Turn the heat on to 100 degrees c and leave the jars in there for half an hour. Fill the jars whilst still warm.

Start by preparing the cucumbers. Top and tail each cucumber, do not peel – then slice lenthways and using a teaspoon scoop out the seeds from the centre. Discard these. Slice each half lengthways into four then cut into small dice (about 0.5cm). Place the cubed cucumbers into a colander. Slice finely the fresh chillis and add these to the cucumbers. Sprinkle over the salt, lay a plate over covered with a weight and stand on a plate which will collect the juices. Leave for three hours.

When ready to start the pickle. Take a large casserole pan or preserving pan and add to it the chopped onions. Add then enough vinegar to cover the onions (I needed about half of the measured amount) then bring to the boil, cover and simmer for 20 minutes until the onions are softened.

Whilst the onions are cooking make the paste. In a small bowl stir together the cornflour, mustard and turmeric then add sufficient vinegar from the half that is still to be used to make a thick paste.

Take the lid from the onions, add the rest of the vinegar, the spice paste and the sugar. Turn up the heat and stir until the sugar dissolves and the mixture starts to boil. Stir the cucumbers and the chillis in the colander to remove any further liquid then once the pan is boiling add the cucumbers. Stir then bring to the boil and simmer for just 2 minutes. The pickle I think is much nicer if it contains crunchy cucumbers and peppers and not a mush. After the two minutes strain the cucumbers out of the sauce and divide between the five jars.

Return the sauce to a full heat and bring to a fast boil. Boil without stirring for 10 minutes during which time it will thicken considerably. Take off the heat then ladle into the five jars making sure it covers the cucumbers. Put lids on immediately and allow to cool before labelling the jars. I had a little left over sauce. Don’t discard it – pop it into a separate little bottle and serve with sausages and burgers.

This pickle should be left for at least two weeks before eating.