These mince pies, even though they are mine, I have to say are the best I have tasted. The mincemeat is easy to make and the pastry quick but just needs a little careful handling.  The mincemeat can be made in advance and stored in jars or made at the same time and used once cold – its up to you. 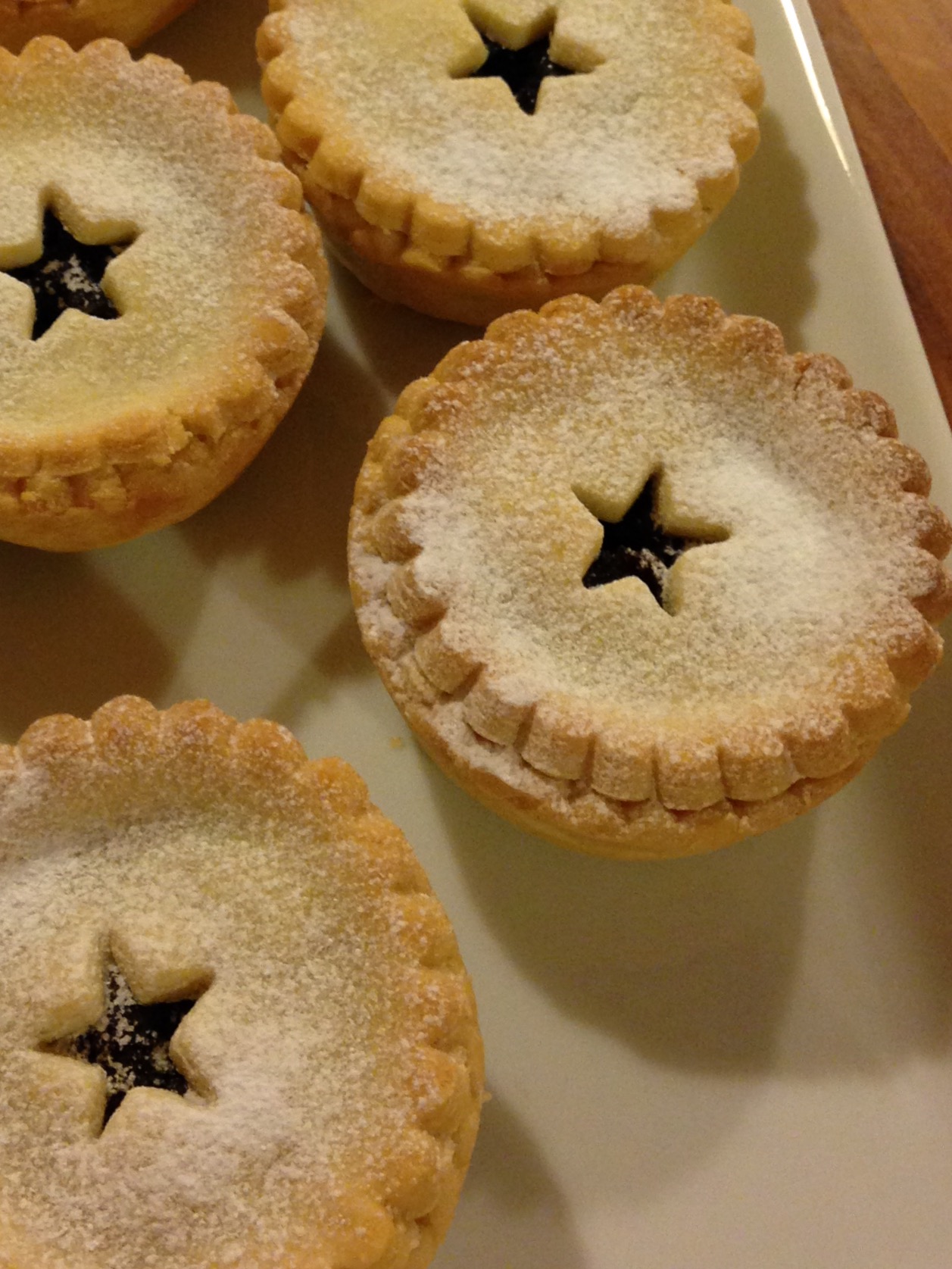 6 tbsp Cointreau/Brandy/Port or a mixture !

8 tbsp. orange/lemon juice from the fruits

Place the fruits, spices, chocolate and alcohol in a large mixing bowl. Finely grate the zests from the lemon and the orange and add these to the bowl of fruits and give everything a good stir. In a large pan melt the butter, the sugar and the fruit juices over a low heat. When the sugar is no longer grainy add all the other ingredients, making sure everything is well combined. Stir over a low to medium heat then bring to boil and simmer for 10 minutes.  Take from the heat, allow to cool slightly then transfer to warm jars and seal.  If you want to use the mincemeat straight away make sure it is cold.

You will need a 12 hole muffin tin which has been lightly greased or brushed with lining paste.

Put the flour, sugar and salt in food processor then add the butter and blitz until the butter has completely dispersed. With the motor running add 6 tbsp egg mix (1 yolk mixed with 5 tbsp cold water) in a steady stream. Stop the mixer when the pastry has formed a ball.  Gently take from the mixer and shape into two balls, wrap and chill for half an hour.

Roll out the pastry to a thickness of a £1 coin about 3mm (See Tip Below) Cut out circles with a  9 cm the pastry cutter.  Also cut out 7cm lids which will just fit snugly over the top or use a star or snowflake fondant cutter. I then use a small star shaped cutter to make a hole in the middle of the 7cm pastry circles.  Fill with the mincemeat, dampen the edges of the pastry and gently lay the top over – do not squash it down – there is no need.  Do not egg-wash the mince pies as there is enough sugar in the pastry to colour them.  Bake at 200 degrees (185 degrees fan)  for 15-18 minutes minutes until the mince pies are light golden. Allow to cool  before removing them from the muffin tin. Finally dust the mince pies with icing sugar.

Tip :- When ready to roll out – it is much easier to roll between two sheets of plastic (The plastic type liner from a couple of cereal boxes, opened out is perfect for this). You will not need extra flour if you roll out between plastic sheets, as adding any extra flour at this stage could upset the balance of the pastry leading to a tough crust.

To get ahead I often make mince pies and freeze them unbaked.  Do not grease the muffin tin but instead line with strips of greaseproof paper, pop the pies in the freezer for 10 minutes then use the paper strips as an aid to flip the pies out of the tin and into a box then back into the freezer. The pies can be baked from frozen. Brush a muffin tin with lining paste, pop the frozen pie into the cup, pop straight into the oven (don’t defrost) and add 5 minutes to the baking time above.

Leave to cool in the tin before turning out.