A gorgeous bread – great for outdoor eating, sharing with friends and family. I have frozen left over slices and enjoyed later, reheated to have with soup. Focaccia is not difficult to make – you just need time for the dough to develop so that the finished bread has lots of holes, texture and taste ! 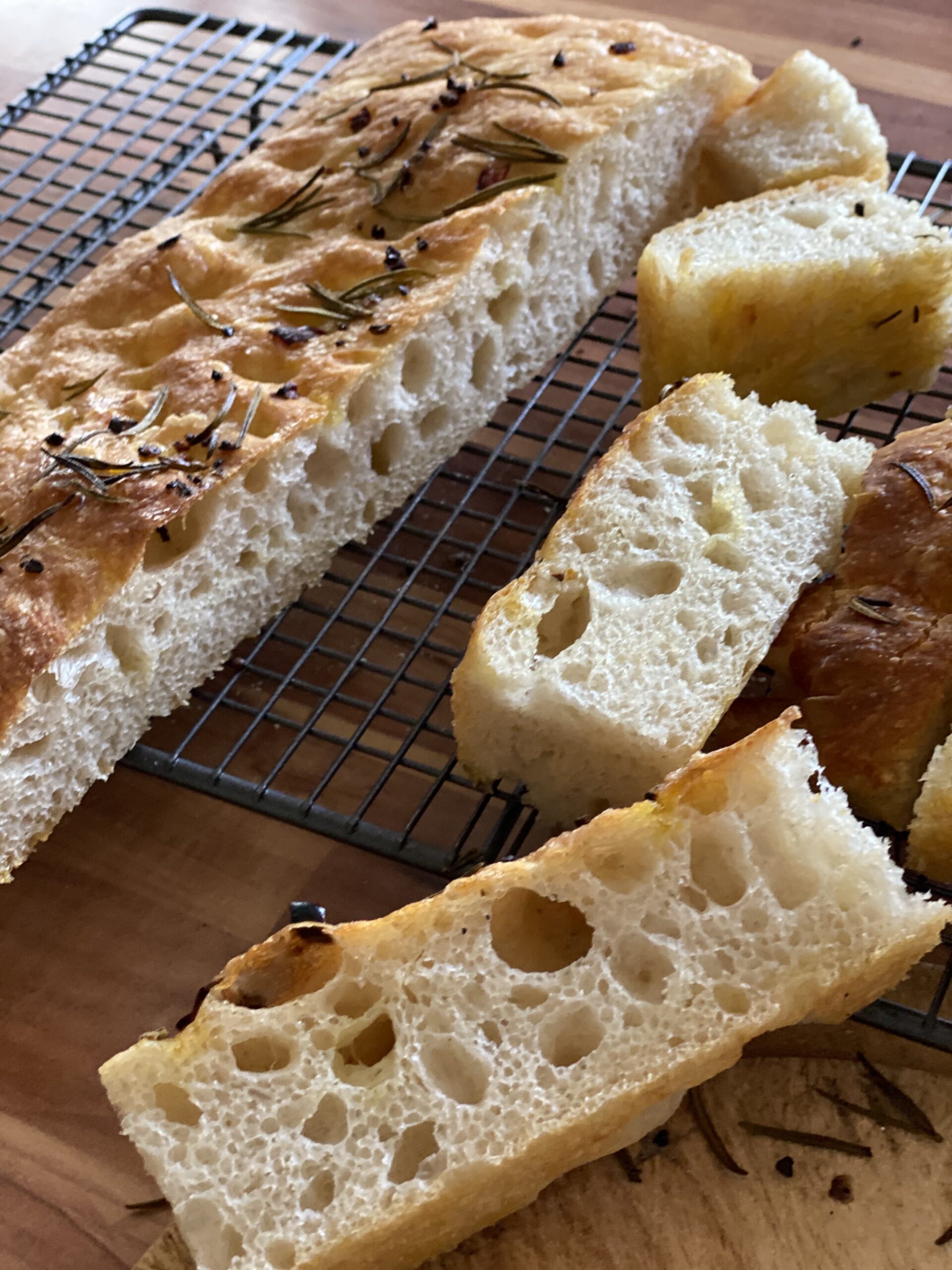 I use a deep plastic box with a lid for proving 22cm square (8 ½ inches) and about 5 inches deep.

In the bowl of a mixer fitted with a dough hook place the yeast, flour, salt and water and mix on a slow speed until the dough comes together. You may have to scrape down the sides and base of the bowl once or twice.
Once you have a sticky shaggy dough, increase the speed slightly until after around 6-8 minutes the dough is smooth, sticky and stretchy and just beginning to leave the sides of the bowl.

Place the oil into the plastic box and transfer the sticky dough. I use a spatula because the dough is difficult to handle.

Take then a bench scraper, dipping it into the oil, and work from each side of the box to fold the dough from the outside to the inside and after doing this on all four sides, flip the dough so that the rough folds are underneath and a smooth oily top is uppermost. The dough will not adhere to the oily spatula.

I lay the lid on the top of the box and leave in a warm place until doubled in size (usually about an hour). A good rising temperature is 35 degrees Celsius but any warm place will be fine but may take a bit longer.

Take the risen dough and use the bench scraper to loosen the dough from the sides of the box then repeat the folding action. Fold from the side to the middle using the bench scraper, along all four sides then flip the pillow of dough as carefully as you can so that the smooth oily base is uppermost and the folds are at the bottom. Cover and leave to rise a second time – again it may take about an hour depending on the ambient temperature..

This time, gently fold the sides into the middle as before (don’t want to lose the precious air) but instead of flipping it over, lay the baking tray onto the top of the box and quickly tip the whole lot over so that the folds are at the bottom of the baking tin and the smooth oily side is uppermost on the tray.

Use the fingers to make the classic hole complexion in the very soft warm dough, spreading it around to fill the tray as best you can,  then back into a warm place to prove uncovered for 20 minutes. Preheat the oven to 225 degrees Celsius.

Once the dough has puffed up then scatter over the chilli, rosemary leaves, salt and garlic and drizzle over most of the dregs of oil from the box. I leave the box on its side so that any remaining oil will run into a corner.

Bake for 20 minutes until golden brown, risen and smelling gorgeous.

Take from the oven and drizzle over the remainder of the oil from the corner of the box.