Allow four hours for marmalade making. The first time I made it I started early evening and then couldn’t go to bed because I was waiting for it to reach a set !  Seville oranges are in season in January and early February  – that’s the only time you can buy them so I make enough for the whole year but this recipe is reduced to make a batch of 5-6 jars. The house will be filled with a lovely orange smell but if it is particularly cold outside your windows will steam up – try and choose a windy day and then the condensation will not be so bad. I am lucky enough to have an outside hob for frying fish and the like and I am afraid the marmalade is done outside too. 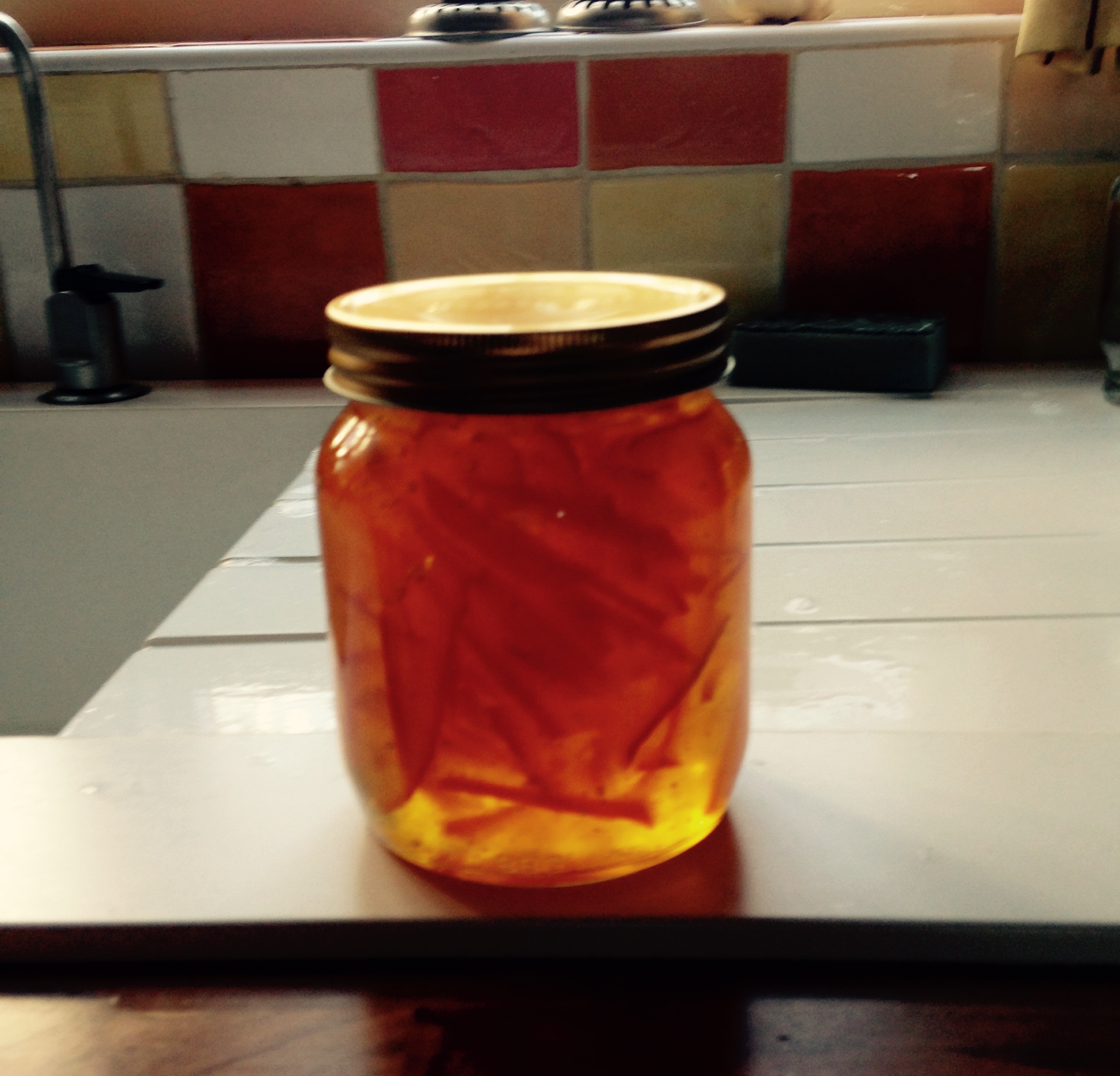 You will need a very large saucepan and a muslin square to hold the pith and pips but I use a brand new dishcloth and cut open one end (they are double thickness).

Start by juicing the fruits. I have a juice attachment on my food processor but if not squeeze out as much juice as possible and put into the pan containing 2 litres water.  Next, with a teaspoon, scrape out the pith and pips from the fruit and place into the pocket of the dishcloth.  It is important to keep these scraps because they contain the pectin which will go on to set the marmalade.

You will be left with a bag of pips and pith so tie up with string and tie onto the handle of the pan and allow it to sit in the water. Next, take all the orange and lemon fruit shells and cut into thin strips.  This can seem tiresome but the thinner the strips, the lovelier the marmalade with be.

Transfer the fruit strips into the pan then set over a high heat, bring to the boil then turn the heat down and simmer for 2 hours – yes 2 hours ! The pan should have a very gently simmer only.  At the end of the cooking time check to make sure the strips of peel are tender and soft.

In the meantime put the sugar in a large mixing bowl and place in a low oven at 100 degrees to warm it through – this will prevent the marmalade being cooled down too much when the sugar is added.

After the two hours – the first thing to do is remove the muslin bag, place in a bowl and allow to cool down slightly. I wear a pair of rubber gloves and carefully squeeze the bag  firstly between two large plates  and  then between my hands to extract the lovely gooey pectin.  This pectin mix needs to be dropped into the pan with the now tender orange peel.  Keep going until you cannot extract any more then discard the cloth bag.

Carefully add the warmed sugar to the pan and stir over a gentle heat until completely dissolved.  At this point I then place 2 tea plates in the freezer and my clean jars into the warm oven that had the sugar.  Bring the oranges and sugar up to a fast boil and keep it there for about 20 minutes.  If you have a sugar thermometer the marmalade has reached its correct temperature at 104 degrees centigrade.  If you don’t have one then take your plate from the freezer and put a spoonful of the marmalade onto it.  Wait a minute then push the cooled liquid from one end with your finger.  If it crinkles then the marmalade is done – if it is still liquid then give it another 10 minutes boiling then try again with the other clean chilled plate.

When the marmalade is done – take off the heat and leave to stand for 20 minutes. This is important as the mix starts to thicken and then when placed in the jars the rind will not float to the top.  Take the warm jars from the oven  and I use a pyrex  jug to pour from the pan to the jar.  Place the tops on whilst still hot.