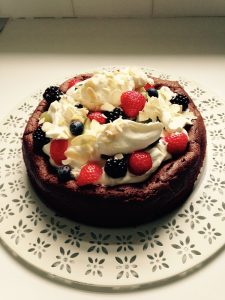 Another week of memorable experiences

Rhubarb is one of my favourite plants

The week started with a meeting with representatives from our local Women in Business organisation who wanted to finalise details for an event I am doing with them during Business Week in Hull next month.

Tuesday involved a train ride to Leeds to the BBC studio where I chatted with Martin Kelner “Live” on his One to One Radio programme.  This took the form of a sort of Desert Island Discs and I had previously selected ten of my favourite songs of all time along with stories and memories from my childhood, younger years and of course Bake Off.  The time went so quickly and I thoroughly enjoyed it apart from the fact that my train was 15 minutes late which resulted in my arriving at the studio with less than five minutes to spare !

Wednesday then took me to London for demonstrating the making of a Shaun the Sheep themed cake to a class of journalists.  Apparently Shaun the Sheep is 20 years old and the movie is due to be released on DVD so the cake was to celebrate this.  I gather it will be on You Tube in the next day or two.

This was a great day apart from – AGAIN – the train was delayed only this time 40 minutes! Nightmare and so stressful.  There I was on this train with a Shaun the Sheep cake and a case full of kit and running late.  When I eventually arrived at my destination I was some 50 minutes overdue. Couldn’t believe that two days out of two my train let me down.

Thursday I was interviewed by the press department from my football team Hull City who were facing a match with Manchester United which would decide their future premier league status.  I was part of a sort of local celebrity line up to present words of encouragement to the team before the match.  Sadly they drew today so will be relegated.  However, their performance was nothing short of brilliant and at the close of play the supporters remained in the stands to applaud their team.  Loved it.

Thursday afternoon I agreed to judge a cake competition for the organisation and support group “Dying Matters”.  This brilliant group of people comprises nurses, carers, relatives, residential and nursing homes and anyone associated with care of the dying.  I had not met any of these wonderful people before but duly turned up at midday to carry out the judging.  It was explained to me that they had decided to present a theme to their cake competition.  The cake would be one that could be presented to someone recently bereaved and there should be a little explanation attached as to the reason for its flavour, style etc.

There were 26 cakes in total which is not that unusual but only when I started to walk around the table did I appreciate what a moving and emotional experience this was going to be.  There were large, very detailed cakes, chocolate cakes, fruit cakes, piped and colourful cakes but there were three in particular which stopped me in my tracks and attacked my senses.  I walked around the table once more then had to walk away to collect my thoughts.  When I looked up the room was full – probably 100 or so people were packed around the hall.

The first prize I awarded to the most perfect little cake – probably only 6 to 7 inches in diameter but perfectly iced with white fondant with a simple posy of red roses and green fondant petals.  It was a lemon cake and the message stated it was just a little bunch of flowers and a slice of cake.  My eyes still full of tears and a failing voice then had to choose a second prize.  I gave this to a perfectly baked Lincolnshire plum loaf on a board with a knife, small piece of cheese, butter and chutney.  The note explained that the plum loaf was in memory of nan who taught the baker how to make the cake and continues to use the recipe today and thinks of her every time she makes it.

I was now losing it completely and had to award a third prize.  We had a cake shaped like a basket made from chocolate with little hand made fondant roses inside.  This was not the most perfect cake on the table and some of the roses were a bit thick and lumpy.  However, the maker put on the note that she wanted to make a cake for her bereaved friend even though she had never made a cake before.

Not sure whether I have been able to relay in writing just how emotional this experience was for me.  Here I was amongst people who truly care for others and were brought together with a common purpose to bake for someone else.  Such an uplifting experience and a cause I will continue to support.

Friday was my day off this week so I spent the day in the garden catching up on the veggie plot.  Everything is doing just fine.

Saturday was a memorial service for a family member who lived abroad and died last week.  The most important message from the sermon for me was to treat all family and loved ones as though it will be the last time you will ever see them.  I took that on board and when I called at my daughter’s house on Saturday evening I gave them all a big kiss and a cuddle – I think they thought I was going soft in my old age !

Saturday – 3pm at the KC stadium Hull City played their hearts out against Manchester United but not enough to stay in the Premier League ! –

I am cooking for the family tomorrow (bank holiday Monday) and expect 15 around the table so am trying out a couple of recipes out on them all.

A week of reflection and then another busy week next week – so until Monday next – have a good one !