Blog Post
A week that took me from London to Aberdeen 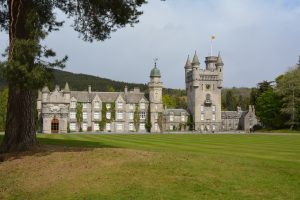 What grows together goes together

Another week of memorable experiences

Writing this blog on Saturday night in Aberdeen.  I fear if I wait for my usual Sunday night slot to start writing I may run out of time or fall asleep during the process !  By the way, it is so strange here because it doesn’t get dark until about 11.30pm.  I did know that of course but have never been anywhere in daylight at that time.  I am told that by the end of June they only get about 3 hours of darkness.

Well, this the last of my three busy weeks I wrote about earlier.

On Monday I did my routine lunchtime Pilates class which happens to have turned out to be the only familiar, routine thing I did in the whole week.  Monday night I was on the train to London, arriving at 10.20pm to then find myself walking the streets trying to find my hotel in the dark and the rain.  I didn’t get particularly nervous until I realised I was walking right off the beaten track.  I had asked directions from first one man in a newspaper booth outside the station and then another man in a sandwich shop.  Both turned out to be inaccurate.  I eventually rang home and Tim became my human sat-nav voice and delivered me safely to the hotel.

The next morning I was collected and taken to a smart flat which was totally kitted out for “photo shoots” and spent the day working with a team from Fabulous Magazine.  My work will feature for four weeks starting in August.  I was very impressed with the speed, efficiency and friendliness of this hard working bunch.  Henrietta, if you read this blog- thanks for the zester !

On Tuesday I didn’t get home until late then Wednesday started early with a meeting before heading off into Hull to participate in an event for Hull Business Week.  I went to the home of Hull City football club – the KC stadium where a private room had been hired for me to talk to Hull’s Women in Business group in aid of my local charity – Cash for Kids.  A vibrant group of ladies who, I was told asked more questions than has ever been known.  Thank you girls – I enjoyed your company and the time passed very quickly.

Thursday had me back in London again for …… (wait for it !)  an afternoon at the Ivy Club !  The weather was absolutely glorious so I was able to wear, probably for the first time this year, a summer dress.  We had drinks and food then presentations from big names including Vassos Alexander, Sally Gunnell, Brendon Cole, Mark Hunter, Fiona Foster, Shelagh Foggarty as well as the Male Judge !  We all share the same agent and it was Yellow Poppy Media’s opportunity to show case their clients.  There were so many other interesting people present who have brilliant life stories but are too many to mention but it was a privilege to be part of this get together.

It was well after midnight before I got to bed then up with the lark (or guinea fowl in my case – they make such a racket at 5 in the morning) on Friday and on the flight from Humberside to Aberdeen Airport for the Taste of Grampian one day food festival on the Saturday.  Having never visited the north east of Scotland before we decided to make a weekend of it and see something of the area.

I must say a few words about the hospitality, generosity and sense of humour shared by the people I met.  I had an amazing time.  On Friday night we had a meal of distinction which had used local meat, fish, cheese and vegetables served up to more than 100 people which included guests such as John Christophe Novelli and Norman Calder !

The next day at the show I learned how to make the local bake “Butteries”.  These are hand made, quite salty, yeasted dough cakes enriched with lard !  Sounds not appetising but I promise you they are one of the tastiest bread products I have had.  Their heritage is that they were made for fisherman to take away to sea because they had a long shelf life, were tasty and obviously very filling.  I then went on to do demonstrations and meeting and greeting around the showground.  This is a massive, one day food festival now in its 16th year and I commend the people for brilliant organisation and such pride in their local produce.  At one point the popularity of the show resulted in a 45 minute tailback of traffic and the police had to intervene to try and filter the queues!

The plan tomorrow is to take a car ride to Balmoral Castle followed by Sunday lunch then plane to home sweet home !