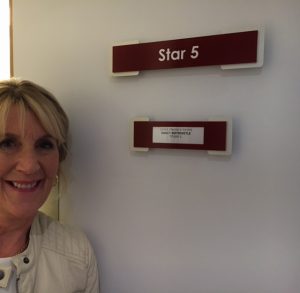 A Surprise Meeting with Olympic Champions

Hello readers ! – I know this blog post is a few days late but I wanted to hang on a little so that I could tell you about my exciting day recording Extra Slice.
You may have noticed that I am writing baking tips to correspond with each week's Bake off challenges. These tips are then uploaded onto Bake Off's Website after the programme. As an extra treat I then add a simple recipe to my website for readers to try.
Anyway, back to Extra Slice !  I was absolutely thrilled when I received the call inviting me to be a "panellist" along with the legend that is Michelle Roux Junior and famous comedian Tom Allen.  I couldn’t believe it, felt a little overwhelmed but at the same time incredibly excited.

I travelled down to London by train and then booked into my hotel.  I was told a car would collect me so obviously expected a cab of some sort.  Oh no – I had a black Mercedes waiting for me bang on time. I had no idea where I was going but the driver suggested I may want to help myself to snacks (crisps, sweets and drinks).  I have never been in a car like it in my life – pure luxury.  By the way I must mention that prior to leaving the hotel I thought it wise to have a meal.  I was a bit pushed for time but stupidly I opted for Sunday lunch of roast beef and all the trimmings as welI as a starter.  The food was delicious but I ended up leaving some of it because I received a message to say my car was waiting.

Quickly I collected my bag of clothes as I was asked to bring a couple of outfits.  Stripes, sequins, dots etc can cause problems for the cameras.  I do remember that from bake off actually.  I arrived at the studio and have to say that from the minute I arrived I was treated like royalty. I had my own dressing room with name on the door, , makeup, drinks and a fantastic bunch of people.  I was then offered a menu and three course meal which disappointingly I had to refuse as I had already eaten.

Jo Brand as well as being hilarious is also warm and friendly so when I was taken for my makeover it was great to see her again.  I had met Jo before obviously on my Extra Slice almost two years ago but then I met up with her at the start of her Sport Relief “Hell of a walk” back in February.

Anyone reading my bog this week who may have been involved with the programme may I just say thank you because I had a lovely time.

Now when I tell you about meeting Michelle RJ – he is a true gent as I thought he would be but then what did I do ? I lunged myself at him and gave him a sort of bear hug ! What an idiot I am but he seemed to take it all in his stride.  The recording went well but I haven't seen the programme yet.

Back to Bake Off –  What did you think when Val left the tent ? I nearly cried but then of course at Extra Slice I met Val in person. She is such a genuine, warm chatterbox and is just lovely.

Extra Slice always includes tasting and judging of bakes that have been brought in by members of the studio audience.  Knowledge is a strange thing in that a certain amount can be gained from reading books but nothing can compare with the incremental learning that takes place every time you make a mistake with your own bakes in your own kitchen.  I do not consider myself an academic or scientific baker but I have found out since winning bake off and judging bakes that indeed I have gained a wealth of knowledge over my years of baking.  There is no substitute for experience in any profession.

The next few weeks have some fun in store for me so hope to tell you all about it next time.
As we've had pastry week I have uploaded a simple pie for those who want to try their hand at pastry.

Have a look on Bake off's website for my pastry tips too.
Thanks for reading xxxxx