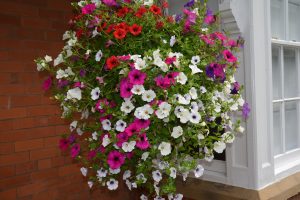 A Day of Baking with Children

I have just returned from a week in France and the experience I encountered I am sure will have you thinking I am exaggerating and certainly embroidering the truth – but believe me every word is precisely how it happened.

I flew on one of our low cost airlines.  Everything was as usual – checking in, security checks and then proceeding to gate.  Nothing out of the ordinary there.

I was then instructed to board the plane and was delighted to have been given a seat on the second row – never had that before and assumed it was because I had booked the flight some time earlier.

I settled into my seat which was in the middle of a three which was fine apart from the fact that the very large gentleman sitting on my left took up most of my seat as well as his own.  Anyway, he fastened his seat belt then promptly fell fast asleep.

We were told that the plane was full so it would be helpful if we could stuff as much as we could under the seat in front so that the overhead lockers could be used for small suitcases.  I therefore tucked my handbag in front along with my jacket and a bag of small gifts I had bought in the duty free shop.  We were packed in like sardines.

Everyone was sitting ready to go – departure time had arrived.  As I was sitting at the front of the plane I did notice a cluster of airline staff chatting near the cockpit but I am sure this is normal.  However, the captain came out, took the PA system and advised the passengers that he was going to have to leave the plane and fly another one.  He explained that he was needed on a plane that had a longer flight time than ours and that a replacement pilot would arrive shortly – in about 5 to 10 minutes.  That’s fine I thought.

As was advised another pilot arrived who promptly took residence in the cockpit – a second officer arrived but then a further staff meeting was held outside the toilet door at the entrance into the cockpit.  The new pilot took the PA system in order to advise passengers that he was unable to fly the plane because in doing so he would go over his hours.  He was therefore arranging for another replacement pilot to come along but this may take one and a half hours !

You can imagine the tired groan from the passengers.  This was an evening flight anyway which was due to land at 9.30pm – a delay of one and a half hours then took us to 11pm plus the 30 or so minutes which we had been sitting by now on the tarmac – I could see we would not be landing until nearly midnight.

A further PA announcement advised we may have to disembark and return to the lounges at the airport but we were awaiting further instructions.

At this point –  a man sitting in front of me on the first row got up out of his seat and went over to chat to the crew.  He was wearing jeans and a tee-shirt and munched on a sandwich.  I assumed he was either trying to establish what was going to happen or have a jolly good moan – but no, none of those things.  This man was a pilot and offered to fly the plane !

One of the cabin crew then used the PA system and advised us that this man would fly us to our destination but we still needed a first officer.  Sadly we didn’t have one of those on board as a passenger so we sat longer and waited for one to arrive.  After 15 or 20 minutes or so a young girl looking about 15 boarded the plane in uniform and we were told she was the first officer – that’s it we can now take off.

The plane duly took off about one hour late and the flight was fairly uneventful.  Even more uneventful for the big man next to me because so far he had snored through the whole proceedings – oblivious to all the changes in flight deck crew.

We had been in the air for about an hour and 10 minutes when the captain announced on the PA from the cockpit that we had started our descent and would be landing in about 25 minutes.  Nothing unusual there except within about five minutes of this announcement there was another one requesting that the cabin crew take their seats for landing.

The crew were in the middle of taking bin liners up and down the isle so that everyone could drop their coffee cups, sandwich packets and sweet papers.  This had to come to an abrupt halt and they scurried to their seats at my end of the plane.

Within ten minutes we were on the ground safe and sound.

This had to be the most entertaining flight ever – it was like a Brian Rix farce !  Every single fact is correct and I kept texting events so that I would have a record.  I knew I would have to write this into my blog.

Praise to the stand In Captain !    No jobs worth here – he was in his civvies, realised there was a problem and got on with it.  Marvellous ! –  also probably didn’t fancy sitting around for an hour and a half waiting for a pilot when he could do the job himself.

I later found out he worked for the airline anyway but at the time the whole thing seemed crazy !

Have a good week during which I will have a think about a recipe as I haven’t shared one for a couple of weeks.