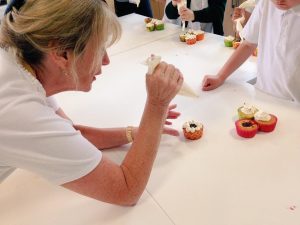 Meeting up with Friends in Manchester

My granddaughter’s primary school held their summer fair this week.  I promised I would open it, judge their cake competition and bake with some of the children so that they could sell their wares and raise much needed funds for the school.

I have to say the school had everything well organised when I arrived.  We had a kitchen and seven work stations all ready along with all the ingredients I had requested for our Strawberry and Cream cakes.  We had a mix of boys and girls – some sadly had never baked before.

Everyone got stuck in and all 14 of us produced 6 cakes each.  Everyone baked, filled then piped and decorated to a very high standard !  Each child kept a cake for themselves and then all the others were displayed on the mini cake trolley I used on Week 1 of Bake Off.

I am delighted to say the cakes sold immediately !

Next came the cake judging.  I was very impressed and cake judging is always so hard because I fully understand how much time and effort has gone into every single entry.

There were some amazing creations – some of the cakes that stood out for me were half a dozen mini carrot cakes which were amazing in flavour, consistency and decoration then a fun penguin cake which was enormous and brilliantly decorated with clean lines.  I found out later that the penguin (Pablo) is the school mascot. This cake was awarded first prize.

There was another outstanding bake which was just six Cornish biscuits – the likes of which I have never tasted before.  They were not only delicious but were all of equal size and baked to perfection.  I wish I had that recipe !

There was another superb chocolate cake which was awarded second place – again this was a fun cake and had been executed really well.

I had a first, second and third rosette and prizes to award to children and then a fourth prize which I decided would be awarded for effort.

When carrying out the judging, which took some time as you can imagine because I tasted each and every cake and gave feedback to the eager faces around me.  However, I came to a chocolate cake !  This cake was rather lopsided, not particularly well decorated BUT when I cut into it was the only layer cake in the competition and the baker had made white chocolate and dark chocolate layers (four in total).  These were filled with chocolate cream and the taste was delicious.

When judging at a school there is absolutely no doubt at all who is the owner of each cake and whilst I was tasting this misfit of a cake I had the biggest pair of brown eyes watching me.  These eyes were just above the height of the cake because the little boy was so small.

I asked him whether he had made the cake himself – he said with a huge smile and excitement that he had except he wasn’t allowed to put the cake in the oven or take it out but everything else was his own work.  I said it tasted delicious but he needs to concentrate a little more on presentation.  He then went on to explain that it looked great when he set off for school but he had to carry it on his scooter to school. Unfortunately on the way to school it had fallen off his scooter and squashed one side !

I just love the innocence that children have and how matter of fact he was about his cake.  No matter what had happened to it he was immensely proud and to him it was a work of art.

This little boy got 4th prize – and his mother cried.

It excites me that schools and children are baking and really enjoying what they do.  When I was at school cookery and needlework were for girls only – and certainly we had no Bake Off to stimulate our imagination.  These children are going to be so skilled as they grow up and hopefully will continue to bake and cook for themselves.

The garden is producing the most amazing soft fruit this year and I just love a summer pudding.  The recipe I will share this week I have called Summer Pudding Terrine.  I don’t know about you but when sometimes you taste a summer pudding there is a tart after taste. I think that the addition of just 20g Chopped French Morello glace cherries take away the bitterness. I have also reduced the sugar content.

It is a very low fat dessert of course so its up to you how much lovely thick double cream you have with it.

Have a good week !