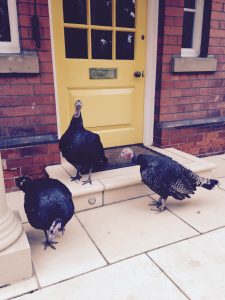 A dog is for Life not just for Christmas

We all make mistakes

Christmas is almost upon us and I have to admit I enjoy the lead up and anticipation of Christmas as much as the day itself. I love a traditional carol concert and Hymers College in Hull do a grand job indeed. I was invited there last year to do a reading and was pleased to be invited again this year.

There was a twist this year however. I wasn't asked to do a reading but a cookery demonstration ! – not only that I had just 6 minutes to do it and no cooking facilities !

Nothing is impossible so after some thought I decided to show the huge audience how to make mincemeat. The recipe is already on my website by the way.

I needed to be able to chat through the demo so did some research on the history of the mince pie. I found this piece of history really interesting. Did you know the first written record of the mince pie can be found in 1662 by Samuel Pepys. Also mince pies used to be meat, fruit and vinegar. The vinegar cured the meat and mincemeat kept for as long as 10 years – amazing.

I could rattle on and on about mince pies ! -The Victorians made them a festive treat by the way and oh yes – Marks and Spencer sell 40 million !!

On the subject of pies I have included a meat pastie recipe this week – not festive or particularly seasonal either. The reason for this is I have collected a number of Twitter followers from the States and they tell me they don't have meat pies!!  I promised Bob I would include one this week !

The turkeys that we have reared for a few months have gone to the butcher. It is always sad, but they had a good life with porridge some mornings and windfall apples every day. Some of my freinds say 'How can you do it?' but if we wish to eat turkey at Christmas a bird has to die. We will raise a glass to them on Christmas day.