Blog Post
A dog is for Life not just for Christmas 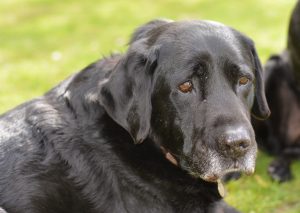 Christmas is only 4 days away

The preparation for all the meals over in fact we have had overload ! I have had weeks and weeks of magazine, television and real food whether that is planning, buying or eating. I was pondering what to write about and so I thought instead I would tell you about Charlie.

Charlie is my black Labrador who celebrates his 14th birthday in two weeks.  How clearly I recall collecting him as an 8 week old puppy. When collecting him from the breeder she did ask me ‘You do just want him for a pet, don’t you?’.  I had no idea at the time but Charlie was not going to be much of a looker. As he grew up he did have short legs, big feet and a very round body – not fat but too big for the short legs. When we examined his pedigree it turned out his dad, grandad and great grandad were the same dog !!

Charlie didn't just have physical issues, turned out he was a bit slow on the uptake when it came to obedience training also.

So – we have a picture ! However, Charlie has other qualities.  He has never growled or snapped, he loves children, parties, food and me !

If I tell you that when I go out to the shop he sits at the gate – rain, hail or shine waiting for me to come home. If I go upstairs he "lays" on the bottom step until I come down. Every day I put on my wellies and walk up the garden to clean out my chickens and again, whatever the weather my faithful friend comes along too.

As I mentioned Charlie is now nearly 14 – in dog years 98! – he is now deaf, very lame and unable to see very well. With his disabilities he continues to be my shadow. He pre-dates all the grandchildren and over the years they have teased him, sat on him, ridden him, dressed him up and even put his ears in curlers. Charlie never complained and even now wants to be at the centre of a family gathering.

I recall one family Christmas bringing out a huge box of chocolates and offering them around. We had enjoyed a large meal so the uptake was small. I put the lid on the chocolates and left them on a table in the lounge. One by one the family left and we waved them off. We came back into the house and gathered up all the cups and glasses and generally had a clear up. When I came back into the lounge the chocolate box was on the floor with the lid on. I picked it up and thought it was light then opened it to find it completely empty. I then thought Tim must have taken the chocolates out for some reason and maybe put them in the fridge – but he hadn't. It wasn't until the next day when I was clearing up the obvious in the garden that I noticed various deposits of silver and gold paper. Charlie had eaten the lot !  To this day I have no idea how he did it ! How quickly he devoured them then got the lid back in place !!!

Dogs are tying, they bring muck into the house especially in the winter. Dogs are expensive, they smell as they get old and the vet bills can be ridiculous. However – the prospect of life without Charlie fills me with dread. He won't be with us for much longer. That unconditional positive regard that dogs have for their owners can be heart wrenching. A few weeks ago Charlie had a tooth removed and a lump taken from his head. The vet said that due to his age he may not survive the anaesthetic – I said my goodbyes but then in true Charlie style he bounced back.

I really believe we have a lot to learn from animals !