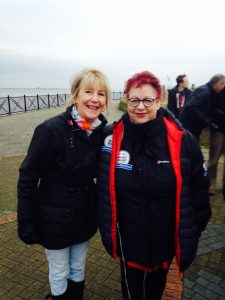 Wonderful skiing in the Italian Dolomites.

Flavours are essential for good food

Before I mention the freezer let me first give a huge pat on the back to the amazing Jo Brand (for those outside the UK she is fantastic British comedian) who is currently walking 150 miles from Hull to Liverpool in aid of Sport Relief.  I was thrilled to be with her when the starting horn was blown in my home town of Barton upon Humber. I could not miss the opportunity of waving her off on Friday morning before her week long slog. We had a chat and a hug before she left and she explained how she has been training since September and so was eager to get started.

Jo – the best of luck for the week. Hope you don't get too many blisters and that the rain and wind are not  harsh !

I first met Jo Brand when I went onto Extra Slice and she was so kind to me. Of course there is a live audience and whilst I had become accustomed to cameras, audiences were something new.  Jo immediately put me at ease and assured me that the audience had nothing but love for me and that I should just be myself.  Sitting next to her on stage felt quite comforting – she felt like a sort of safety net. I think she is smashing.

I met her again at Jools Holland's Hootenanny and once again she came over to me, had a chat and was genuinely friendly.

I know she will do it this week and I have made my donation.

Right – the freezer! How many have done this ? My freezer lives in what is called "The back place". The back place is a sort of utility room attached to the garage.  It's a good place for a freezer because it is always cold. The freezer is a large upright one – I used to have a chest freezer but things got lost in the bottom only to be excavated years later totally unrecognisable.

Anyway, I retrieved something from the freezer earlier in the week and slammed the door behind me. Two days later I went to put something in – breadcrumbs I think – but when I went to the door it hadn't closed properly !

Devastation ! Each shelf had frosted up and the contents had about an inch of ice on the top ! I had no alternative but to clear things out and start again. When I say clear out I didn't throw things away but just had a good sort out and cleared the crust of ice off everything before organising and replacing items in an orderly fashion.

What am I thinking about when I freeze certain things ? I found a piping bag with about  2 tbsp of buttercream inside. What was I ever going to do with it ?  Also a 300 ml plastic cream carton half filled with uncooked cake mixture ! I even found a frozen Doboz Torte from the Bake Off !!! – eek !!

All is now ship shape and I will not be freezing ridiculous amounts of things in the future – no point.

This week I have written a recipe for the easiest traybake using yoghurt. I made it because I had a large tub of yoghurt approaching it's sell by date and a bag of frozen raspberries which had broken into tiny bits in the said freezer but were great for this recipe.  The recipe is very low in sugar – around 9 grams per piece compared to about 46 grams for a slice of victoria sandwich filled with buttercream and jam.  The recipe makes 24 pieces.  Look under Recipes then Cakes – I can't sort the direct link this week.

Have a good week readers and make a donation to the amazing Jo Brand !