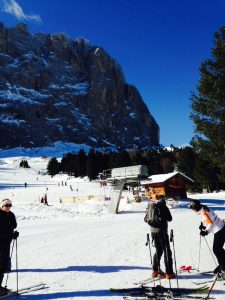 We all need something to brighten up those grey,dull and rainy days

I am relieved to write my blog this week fully in tact and no bones broken. You may have guessed – yes, I've been away skiing for a week in Italy. This year as in previous years we went to a  little mountain town in the Italian Dolomites called Selva  Gardena and it is delightful.

I think the best skiers are those that start when they are very young. It's like any sport I expect – the younger the better.  Many skiers look so graceful, stylish and appear to need no effort at all to get down the steepest of runs.

Me – on the other hand !!! My first skiing holiday was when I was 40 so enough said !   – not graceful or stylish and tons of effort required.

However, then I met Ivan a skiing instructor in Selva !  Ivan was born in Selva and was such a good skier that he was chosen to ski for Italy in the Olympics in 1986. Those old enough may also remember a British competitor named Eddie the Eagle who was brave enough to compete in the Ski jump in the same year. Ivan was 4th in his event in the semi final, but unfortunately he fell in the final. He was lucky enough to get chosen to coach the Italian team in the next Olympic games.

Then he is presented with me !!! Ivan has patience, obvious skill and a huge personality and I have been taught by him for the last 5 years and at last I can probably admit to being able to ski. Thanks Ivan !

One thing I love about holidays is the local food. At lunchtime on those alpine slopes in the Dolomites I always opt for a bowl of barley soup with cheese and Schuettelbrot.  The latter is a rye flatbread (translated – shaken bread) which is Austrian and used to be baked just two or three times a year ! It keeps for months and is eaten with dried ham and cheese. It is a large cracker about the size of a plate then broken off into bite size pieces.  It used to be taken hiking, skiing and walking in the Alps. I absolutely love it!  It's hard, crunchy and tasting faintly of aniseed – perfect partner with cheese.

I asked about this amazing bread at the restaurant which became my favourite lunchtime stop. I was given a list of ingredients and promised them I would have a go myself. (I was told by the staff that they had seen me on Bake Off with Italian subtitles! – hilarious).

I have made a batch today and am very pleased with the results. If you fancy having a go I thoroughly recommend it.  I attach my recipe here.

Have a good week everyone ! Talk soon x