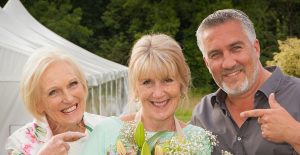 The Season For Country Shows

Sunday night again and I am settled down with iPad writing up what I hope will be an interesting blog.

It has been a funny old week because constantly my mind has drifted back to the events of this time last year which was the week leading up to the Bake Off Final even though it didn’t hit our TV screens until October.

I have been asked many times “How did you keep it a secret ?” .  I actually found that quite easy because in actual fact I think you don’t really want to know and for this reason I didn’t tell anyone.  What I did find amazing was that the family members who went along to the garden party kept the result absolutely to themselves – even the grandchildren !

As could be seen on the TV there were probably in the region of 200 or so people at the final and there were no spoilers – marvellous !

People have asked me many times “How did you feel when your name was announced as the winner ?” – and the reply if I am absolutely honest is that I can’t remember.  I recall absolutely nothing other than the photo with Paul and Mary.  Mary told me to enjoy my year and Paul told me that everyone would watch what I put into my supermarket trolley from now on !

Sometimes the events of that day seem a lifetime ago and other times it feels like yesterday !  My Moulin Rouge haunted me for days afterwards.  I had nightmares that I had missed something off or dropped it.

In reality I had practised it three times in total.  The first time was on the Wednesday.  You may recall underneath the windmill and above the cake there were choux buns covered in caramel and filled with passion fruit cream.  Well, in my first effort the choux buns were covered in black caramel because I wanted a black and red effect – a sort of burlesque style piece montee.  However, the family tasted the finished piece and were telling me that it was really quite good but I was shocked to see that their teeth had all turned black !!  Can you imagine if I had fed this to Mary and the male judge ? – devastation !!!!!

I practised the windmill again on the Thursday but couldn’t finish it in 5 hours.  I went 10 minutes over which wasn’t good enough because I needed spare time for interviews and questions.  I liked to allow 20 minutes for that.  I therefore needed to speed up by another 30 minutes.  I laid in my bed on the Thursday night but decided the only thing to do would be to get up early the next morning and have one final practise .  I therefore came down the stairs – got out all the ingredients then went to bed and got up the next morning at 4.30 and did a final run.  I managed it with 10 minutes to spare which still wasn’t ideal but I figured I could get ahead if I did an all-in-one sponge for the cake instead of the creaming method – so I did.  I also requested two mixers so that I could mix both cakes at the same time and that saved me some precious minutes.  You may recall when seeing the Final I had flour everywhere because I loaded both mixers with the ingredients but hadn’t plugged one of them in.  When I realised this and plugged it in I had left the speed on full – crikey.

Anyway, enough of that nostalgia and lets get back to the present !

This week our garden has started to produce raspberries and I have had a run on muffins ! – so my recipe this week comprises both.  I have frozen raspberries still from last year and these worked extremely well because I broke the fruit up into pieces whilst still frozen which allowed them to spread through the muffin mix more effectively.  Have a go at my recipe for Raspberry and White Chocolate Muffins – I think they are spot on.  I only make 6 at a time because I think they should be eaten the same day.

I want to watch Black Work now with the brilliant Sheridan Smith (A local celebrity!) so talk next week x