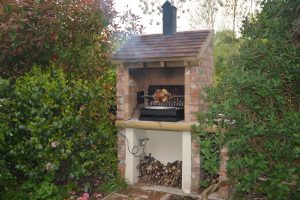 Sunday night and sitting writing my blog.  I am surprised that each week I find something of interest to write about.

I was overwhelmed last week when I received such encouraging comments re my meal experience in France.  I was a little concerned that I had no recipe to share but when I enquired I had had more readers than any other week.  Thanks everyone x

This week Tim has finished my Bar B Q !  This “Barbie” was talked about, thought about, pictures drawn and estimates written then started last year but because of Bake Off the project was put on hold. It has been built with old reclaimed bricks that have been lying around the garden, old concrete slabs that the bee hives used to stand on and reclaimed clay tiles. I have decided therefore that whatever the weather tomorrow the Bar B Q will be lit and we will be roasting a chicken floured with tarragon and orange.     https://www.nancybirtwhistle.co.uk/recipes/rotisserie-chicken-with-orange-and-mixed-herbs

The design we have chosen is one used regularly in France and last year we bought and transported back the iron Bar B Q metalwork. The fuel (in this case wood) is burned at the back of the Bar B Q and then as the food spits and splutters the flames do not fly up and envelope the food being cooked.  It is brilliant.  I will share the recipe of the roast chicken on my website.

As the weather starts to warm up my thoughts frequently turn to the events that must be taking place this year in ‘The Tent’. Exactly one year ago we were working through Week 2 – biscuit week and for me Hansel and Grettel.  I remember being sent the task of a biscuit scene and really not having a clue about what to produce.  So very often when the tasks arrived by email I would suffer 24 hours or so with a completely blank head but then the fog would clear and some ideas would start to happen.  I was quite pleased with Hansel and Grettel, thinking it was original and fun.  I felt it told a story and thought I had “pushed the boat out” by baking three different biscuits.

However, when I saw the brilliant work produced by Luis and Richard I realised they were a force !

Richard produced his fabulous pirate scene and Luis his George and the Dragon ! genious.  I remember everyone in the tent that week showed such imagination and flair that I knew we were in for a fun competition.  I worked one bench in front of Martha and recall her ski scene with her marshmallow snow and ski chalet with little light inside and even ski lift with chair made from biscuit.  Chetna equally depicted a beach scene with beach huts and carousel.  Sheer brilliance !

We were starting to gel as a group and whether it is the situation we were in and the fact that we more or less lived together for two and a half days – I felt I had known these people for a long time.  I didn’t feel that the competition was with the other bakers to be honest – the competition for me was with myself and the judges.  I had to prove that I could perform as well as in practice and trust in my choice of flavours.  I recall in week 2 our signature challenge was biscuits that could be served with cheese.  I chose to make rye and fennel thins.  I love these little biscuits and I really believed in them.  When they were judged I was absolutely bowled over because Paul and Mary loved them.  To receive confirmation that my flavour combinations were subtle gave me enormous pride.

In the same vain – to hear positive comments for my colleagues was also a relief even though it was realised someone would have to leave the tent.  We supported each other all the time – jokes, hugs, tears – we had it all but never a cross word.

I had a strong start in week 1 with my one and only star baker award.  In week 2 I turned up for the weekend wearing a green top with a star on front – this was pure coincidence but Chetna was sure I had worn it intentionally !  We all laughed a great deal but then decided that whoever was awarded star baker they would have to wear a star the following week.  Richard was star baker week 2 and invested in a tee shirt with stars.  Week 3 Luis was star baker but invested in The Sheriff badge which was handed from baker to baker and then finally rests with me.

Great idea, great bakers and the greatest experience ever !