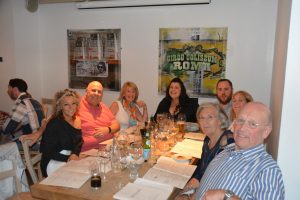 Bake Off is Back!!

A Day of Baking with Children

Probably the worst summer conditions but the finest time for writing this weeks blog post.  A week ago exactly I opened Horkstow summer fair and unlike today we were blessed with sunshine and a great time was had by all.  This little village fete took me back to my youth.  There was a coconut shy, hoopla stall, splat the rat and skittles.  We had tea served in  a china tea pot with china cups and saucers and little tables with tablecloths.  We were given a milk jug with a  little linen weighted top to keep off the flies.  The show was organised by residents of the village and everyone’s time, effort, prizes – everything was donated and in aid of the village church.  The church, I found out, needs £3000 per year for basic upkeep and it is thanks to the efforts of local residents (only a few hundred live in the village) that this money is raised each year.  I am delighted that last Sunday they raised almost £1600 ! – a bit of a record by all accounts !

I have been asked so many times “What has been the best thing you have done since winning Bake Off?”  My response has to be – what do you mean by best !  Is best the glitz, spotlights and star spotting at events like the National TV awards and Jules Holland’s Hootenanny or is it taking the time to get down to a local village fair,  donating a cake, doing a bit of cake judging or saying a few words? The glitzy stuff is obviously great and I certainly would never in my wildest dreams have envisaged being a Red carpet invitee at the O2 arena, sitting on the front row and parading up with the best to share in the receiving of the award,  but what is also great is being able to use my success last year to make a difference at small local functions.  I have been told time and time again that takings doubled, people visiting doubled, this event or that event has never had so many people etc etc – that for me is what it is about.

In the garden :  I thought I would mention strawberries.  Mine have now finished fruiting so this week I gave them their “haircut”.  Even if you are not a big gardener or don’t have a big space you may have a few strawberry plants and so now is the time to sort them out.

Firstly, take out any weeds that may have got themselves established during the fruiting season and then I have a big pair of scissors and I literally cut off all the leaves leaving just the crown of the plant and about 7.5cm of stalk.  It may seem a bit severe but the plant once it has finished fruiting will put a lot of energy into throwing out runners which will then produce baby plants.  By cutting everything off you will stop that happening and the plant’s energy will be kept within.  Once your strawberry plants are about five or six years old though you may decide to allow this baby growing to happen and then you can replenish your stock with the resulting offspring.

This week I saw the Bake Off trailer for Series 6 – that is so exciting and cannot wait to watch the first episode to try and best guess who will win.  I think it is fantastic that Series 5 bakers remain good friends – and that’s not cheesey – we really are good friends.  We have a Whatsapp group which I am sure I have mentioned previously and not a day passes without somebody gets the dialogue going with something or other.  To give you an example – Kate said on about Tuesday or Wednesday this week that she fancied coming up North and was anyone free.  This resulted in Claire, Luis, Diana and me meeting up with Kate in Manchester !  We had a great evening and never stopped talking (and laughing). Husbands and wives came along too – great night.

Just looked out of the window and yes – its still raining.  Time for a glass of wine I reckon !

Have a good week everyone x