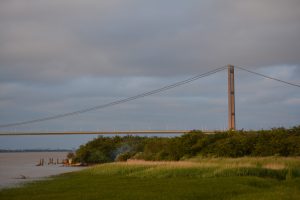 Longer days and much to do

Easter is just around the corner

This week has been an interesting one.  There is an assumption that nothing much happens in the Humber area – but they are wrong!

I was invited to the re-opening of a pub on the South bank of the river Humber which had been flooded back in December 2013 when the Humber burst its banks and inundated South Ferriby.  Colin McGurran (you may remember him from TVs Great British Menu) has taken the bull by the horns and invested his time and money into The Hope and Anchor and rejuvenated this fantastically situated old pub.  I wish him all the best – his taster menu was absolutely delicious and I can’t wait to go back for a steak!

In contrast, a village directly opposite South Ferriby on the North bank, i.e. North Ferriby have also taken the bull by the horns and their football team won the FA Trophy at Wembley Stadium today.  I listened to a very exciting commentary on the radio and was near to tears at the end.  Thankfully football isn’t always about millions of pounds worth of football player! Many of the lads that took home the trophy all have full time jobs – brilliant!

Midweek the Lord Mayor of Hull celebrated the City’s hundred years since the introduction of the post by hosting a Centenary Bake Off at the Guildhall.  I was invited to judge the cakes and I have to say there had been a huge effort so many cakes to judge – as well as the cakes competing there was also a bring and buy organised by local schools.   I was inspired by the number of children who had made the effort to bake and showcase their imagination and flair.

Then at the end of the week I took myself into a local primary school and baked biscuits with the children.  We made 65 biscuits then decorated them with coloured icings.  I love the way children are so different.  The different approaches to weighing a 20g ball of dough – hilarious!

The Bake Off experience has illustrated to me how children have been inspired to bake.  That is absolutely fantastic because “making your own” – whether that be baking, sewing, knitting, growing – has become the thing to do and I applaud that.  As a result our old skills are being rejuvenated and reinvented and I find that so exciting.

More news is that Bake Off has been shortlisted for the Radio Times Audience award at the BAFTAs and the public can vote on line for their choice.  It’s a tough one though because it’s up against Strictly, Missing, Cilla, Sherlock Holmes, Game of Thrones and Eastenders.  Guess who I voted for?

I think the closing date is the beginning of May.

At home the family will come over on Easter Day and we will eat our last turkey which has been sitting in the freezer since Christmas.

I hope the weather is fine so that we can have our egg hunt outside – its chaos if we have to hide the eggs indoors.

Don’t know about you but the thought of a fruit cake at Easter doesn’t excite me so I have never taken the time to make a Simnel cake  .  Fruit cake, for me sits with Christmas and we continue eating ours well into January so I am not ready for another in March!  I decided to research the Simnel cake and the word actually derives the latin word simila which means fine flour.  I therefore put my thinking cap on and came up with my own version made from chocolate and almonds.  I still use marzipan and also researched that historically sugar violets would be used to decorate – so have included a version of my own.  I have included the recipe on my website – have a go.

Must tell you this story.  I have Guinea Fowl and they are great birds and certainly keep the fox at bay but this week I went up to the chicken run to look for eggs (9 chickens and still not laying!).  Anyway I was wearing a pair of leggings in a black and white dog toothed check.  What a shock – I walked to open the gate and the male guinea attacked my legs!  Couldn’t understand it then I went into the run to clean out the chickens and he did it again!  Then it dawned on me – my trousers matched his feathers and he didn’t like that at all. Hilarious!! The video is on my twitter account

Crikey – I am rambling on this week so will close now x.

Happy Easter – have a go at the cake!