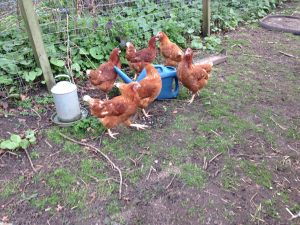 Easter is just around the corner

This, my second blog I have decided to write on the train.  I have often “people watched” on the train and wondered what kind of jobs they do and what work they must be busy with – maybe writing up notes after some high brow meeting, writing top secret emails to high powered executives or simply playing solitaire – and here I am now feeling quite studious and business like – furiously typing away!

Well, its been quite a day today (Tuesday 10th March) because I was invited to the TRIC awards (absolutely – I had no idea either until I looked it up).  It’s the Television and Radio Industries Club and they have an annual awards ceremony.  Format is as you would expect with nominees and presenters and various celebrities accepting a trophy.  It was quite a show with around 1600 guests and was held as it has been since 1969 at The Grosvenor House Hotel in London.  There were 16 awards in total and the award for The Best Factual Programme went to the Great British Bake Off.  The main talent of the show, ie Mary, Mel, Sue and the male judge were not available so Luis and I were asked to accept the trophy ! Amazing experience and we gave a speech.  Ainsley Harriet presented Bake Off’s award and I felt very privileged and proud.

The Eastenders cast were there and Danny Dyer won Soap Personality but what a surprise when I walked passed their table on my way to the loo and they called me back and thanked me for the cake.  What a great bunch of people !

Back in North Lincolnshire dare I say (fingers crossed) the weather is warming up.  Had 16 degrees last weekend for about an hour !  Made a start in the greenhouse and have sown leeks, broad beans, purple sprouting broccoli and sweet peas from seed.  I also start onion sets in individually portioned trays in the greenhouse just to get them rooted.  The birds are then less likely to pull them out of the ground.

I look forward to having a proper gardening session and the clocks change soon.  Even though we are told its been a mild winter – it still has felt pretty cold.

Not too cold for red mite though!  Now, red mite I have been battling with for some time.  They are, as their name suggests, red  (because they are full of my chickens’ blood ) and mighty tough and will torment a chicken literally to death if not kept in check.  How they get into the chicken hutch in the first place I have not a clue – probably wild birds.  I have an immediate treatment plan involving changing the bedding, spraying and powdering the hutch and the birds and keeping a very close eye.  If anyone thinks they would like to keep chickens then red mite as a pest come second only to the fox !

I have this week added a further six point of lay chickens to my flock.  I had a quiet word with the three old ladies that haven’t laid an egg in weeks that if things don’t change they may have to go !  Guess what ? someone then laid an egg every day this week ! trouble is I don’t have any idea whether its one egg each or the same chicken laying an egg each day so they all must stay.

On the baking front, believe it or not people ask me over and over again how to make a good Yorkshire Pudding.  They are simple but tricky to get right.  Historically of course (and even when I was a child) we were given a Yorkshire pudding with gravy before the main course of roast beef.  The obvious reason was to fill you up so that you wouldn’t need much meat.  An authentic Yorkshire pudding would not be muffin tin sized as is so often the case nowadays but about 3 inches (7.5cm) in diameter and just 4 to a tin.

Oven temperature is important – it must be high and the fat (I use lard) must be smoking hot.  A good Yorkshire pudding should be crispy on the outside but light and fluffy when cut into it.  Not hard on the outside and certainly not stodgy or doughy either.

I attach a link to my Yorkshire Pudding recipe and a photo.  https://www.nancybirtwhistle.co.uk/recipes/yorkshire-puddings

Owing to the fact I am showing off on this train I have probably written more than usual so I will close now and talk again next week.  I will settle down to my book for the rest of the journey.