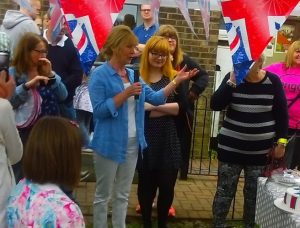 Here we are again !  I cannot believe two weeks have passed since our last chat (I say that as I write as though I have someone sitting in front of me whilst I natter on – its better that way otherwise it feels like an entry in a diary).

Anyway, unlike my last blog post which was an exciting account of decorating my kitchen, this last two weeks has been a whirlwind and a story really of two extremes.

I am writing Saturday night, well evening really.  I usually leave my writing until Sunday but tomorrow will be a full day and so I might find myself floundering.  I will tell you about tomorrow next time.

Back to the last fortnight.  I took my usual Hull Train 2 hour journey down to the Capital.  The service is fantastic and the people I have since come to know who commute into the centre of London can easily take 2 hours and they live a few miles outside.

This event took place on the Saturday with an early start so I arrived in London the Friday and had a couple of meetings before settling down for a glass of wine and a bite to eat.  Sounds fairly ordinary you may say but no – this glass of wine and a bite to eat – ahem !!!  was at the Soho Club – 76 Dean Street !  My meeting was with someone, quite influential who has membership there and so why not?  A true experience for me and one which obviously I thoroughly enjoyed.

My event on the Saturday was in North London and had been booked by Virbac, a French animal pharmaceutical company.  Seems an odd connection to baking you may think but the reason for my involvement was to be instrumental in “team building” and a little light relief from lectures and the heavy stuff.  Well, what fun that was – truly.  A group of great people, some had never baked before and I demonstrated then they had to follow.  There were good results, great results and some perhaps not to be mentioned.  It was hilarious and if anyone from last weekend is reading – thank you all so much.

I travelled home Saturday night along with the rest of the population who had been down to London for the Queen’s 90th birthday celebrations !!!

Sunday – no day of rest as I had promised to judge the cakes at a 90th Queen Birthday Street party in my home town.  A huge turnout which was great, the weather was kind but the cake judging was difficult as there had been so much time, effort and creativity displayed.  I therefore decided rather than a 1st, 2nd and 3rd prize we would have – Originality, Taste and Effort.  I feel that is more fair especially where children are involved.

In fact my prize for Taste went to a simple cake – a Victoria sandwich decorated with strawberries and cream.  If baked correctly nothing tastes more delicious.  I have to say cake judging is difficult because I would say that perhaps 70-80% of cakes are overbaked but may be decorated beautifully.  The cake baking has to be correct and this little Victoria sandwich was perfect.  My recipe this week is for such a simple cake with a low sugar filling.  It takes so little time – probably only an hour start to finish and that includes cooling time.

I would just like to wind things up by making a special mention for all those people, not only in Barton where I live but all over the country who help those less fortunate than the majority of us.  These people, often volunteers give their time, energy and enthusiasm to their cause. The street party last week was held so that any funds raised would be used to take the local children  for a day out during the school summer break as many of them don’t get a holiday at all.

Have a good week