Blog Post
The Year of 2014 Bakers Meet Up Again 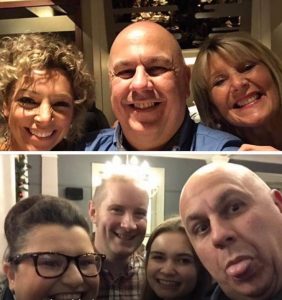 Christmas is just around the corner

Hello again my friends.  Don’t know about you but I would just like the days to slow down a bit so that I can have a proper think about Christmas.  Having said that I refuse to be drawn in to Black Friday which has now become Black Friday weekend and now Cyber Monday !   Don’t do it, don’t be pressurised !

I love Christmas, the preparations, decorating the house, getting together with friends, church on Christmas eve and reliving some of that excitement when I see it on the faces of the grandchildren.

Christmas celebrations started early this year with our Bakers’ do.  Can you believe the only date we could get the majority of us together was the 19th November ?  We decided this year to rendez-vous in Manchester and it was great to have a meal with my baker mates and partners. We chatted endlessly catching up on everyone’s news.  We have a Whatsapp group and communicate regularly but there is nothing like a good face to face !

What has now become custom and practice is our taking part in a “secret santa”.  I was delighted to pick Iain’s name out of the hat.  I thought a book on how to make ice cream was appropriate – hope you enjoy it Iain.

Christmas then had to be put on hold during the week as I became involved with other things.  Most people will know that Hull is City of Culture in 2017 and lots of preparations I am sure are going on behind the scenes.  Preparations are also going on in full view as it seems to me when visiting the centre of Hull last week.  Most of the pavements are being relayed which is a nightmare for shoppers, shopkeepers and traffic.  Workmen, heavy plant and machinery and temporary walkways are the norm.  Everywhere you go in the city centre is the same – bit like deciding instead of redecorating just one room at a time, deciding to go the whole hog and refurb the house totally whilst trying to still live in it !   The end result will be amazing no doubt.

The reason I was in the City centre last week was because I had been invited, as a Hull lass, to do a spot of filming and talking about my favourite area of Hull for use in the run up to City of Culture.  It was actually quite nostalgic as I decided to concentrate my piece on Hull’s Old Town.  I remember particularly as a child having to trail around with my grandmother whilst she did her food shopping and she would buy her fruit and vegetables from the market then I would have fish and chips at Bob Carvers.  As a special treat and very rarely I would then be taken to Hull’s Joke Shop.   I couldn’t resist having a walk around the whole area and then a walk into The Arcade to find out whether the Joke Shop still exists – and it does !  The shop is almost the same, packed with jokes, games and magic tricks that used to fascinate me as a child and still do now.  In fact I bought a bag full of fun for Christmas day to share with the children and grandchildren.  I also found out that the shop has been in existence for 85 years.

I hope my little film clip in the Land of Green Ginger (yes that is a real street name) will be interesting and will encourage people to visit Hull next year if not before.

The end of the week was full of cake !  I made five celebration cakes in two days and by Saturday just had to get out into the fresh air so I walked the dog and raked up some leaves.   I realise I haven’t discussed anything gardening lately though there is always a job.  One thing I must urge you to do if you have a garden is rake up those fallen leaves.  I remember one year thinking I would leave it all to nature – it’s a massive job raking them up so I left them.  Big mistake because the next year the lawn was very patchy, covered in worm casts and taken over by moss.  If you want a lawn then you must rake off the leaves and pop them into the compost bin.

I always attach a recipe and this week I thought it appropriate to share my mince pies and there is a little story attached.  Last year I was doing a bit of filming at home and I had made mince pies to give to the crew.  The food photographer took a mince pie and told me it was his first of the season.  He came back in January to finish off the piece and told me that not only had my mince pie been his first of the season – it also turned out to be the best !

I love a bit of feedback so feel confident you will love these.

Even if you buy your pastry then do make the mincemeat – it is delicious and so easy.

If you are super organised you can make these mince pies and freeze them in the tins uncooked.  Once frozen, pop them out of the tins and store in a box then bake them as you want them.  Alternatively, bake them then freeze and thaw as required.