This showstopper can be served as cake or dessert – either way it is a delight. Layers of light vanilla genoise sponge, delicious pastry cream, raspberry jam, fresh cream all enclosed in the thinnest fondant – this cake is a delight.  This cake can easily be made gluten free and although there are a number of component parts they can all be made in advance.  Great for a special occasion. 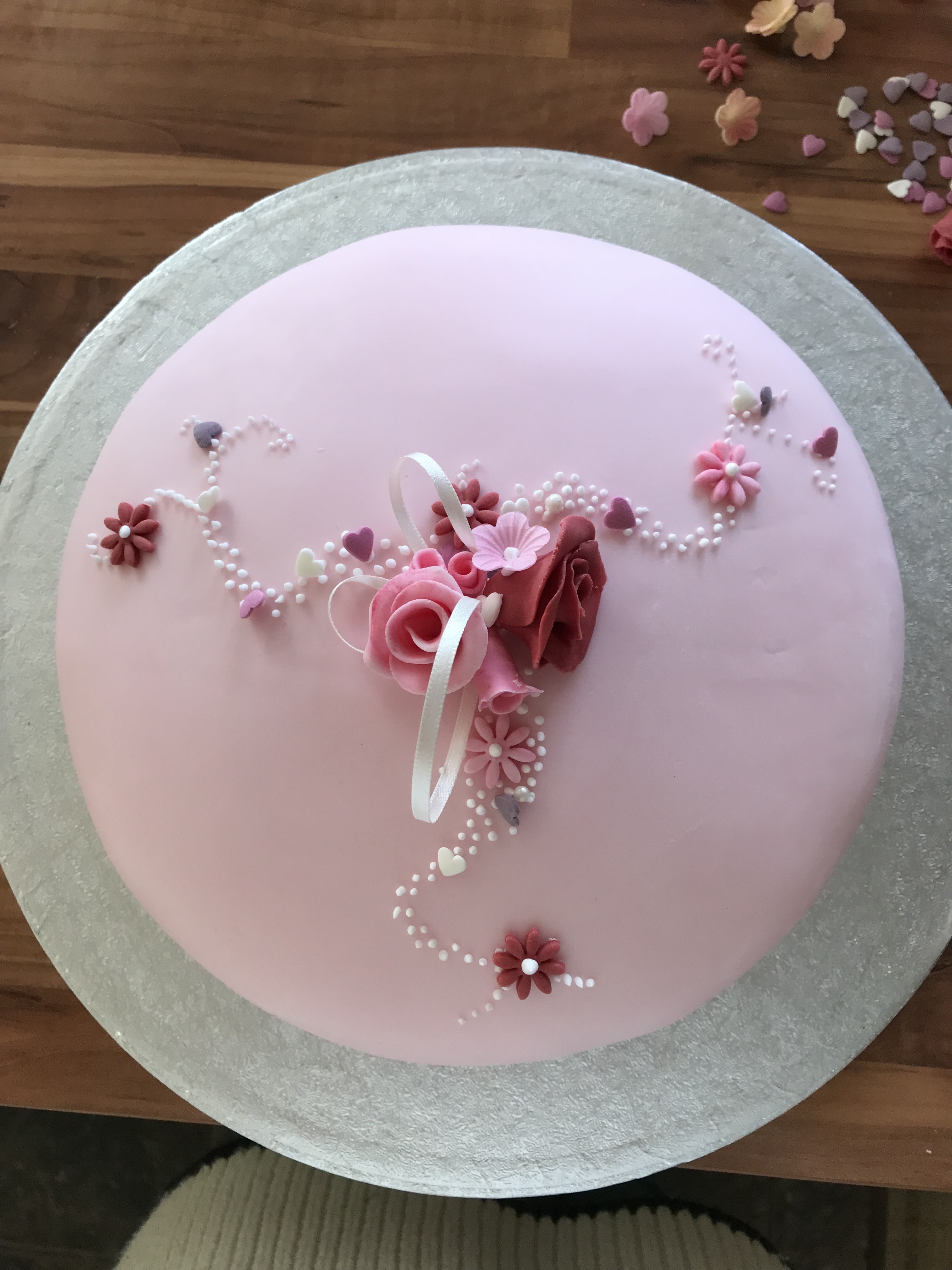 You will need a 23cm loose bottomed cake tin brushed with lining paste and base lined with paper..

For the quick jam

For the Genoise sponge

For the pastry cream

Royal Icing : 1 egg white and sufficient sifted icing sugar to make an icing that will stand in stiff peaks

Start by making the jam as it needs to be completely cold before using. I used frozen raspberries.  Simply place the fruit and sugar in a saucepan and place over a low heat.  Stir from time to time until the fruit thaws and the sugar dissolves.  Increase the heat and allow the jam to boil briskly for about 5 minutes until it thickens.  If you have a thermometer the temperature needs to  reach 104 degrees c .  Place the jam in a small bowl and set aside to cool.

To make the sponge – Preheat the oven to 170 degrees c (fan)  In a large roomy and warmed mixing bowl whisk the eggs and sugar together until light, doubled in size and the whisks leave a trail in the mix when lifted.  This can take up to five minutes.  Sift the flour over the egg/sugar mix then fold in gently.  Do not rush this mixing as you want to retain as much air as possible.

When the flour has been well incorporated (and don’t forget to scrape your spoon – flour will always collect on it) pour the cooled melted butter into the batter and stir this in. Just around six stirs will do it – don’t overmix.

Transfer to the prepared tin and pop it into the oven and bake for 25 minutes until the cake is risen, leaving the sides of the tin and soft but firm in the centre. Cool in the tin for 10-15 minutes then turn out and leave to cool completely on a wire cooling rack.

To make the pastry cream: Place the egg yolks, sugar, vanilla and cornflour in a medium saucepan.  Mix  together then gradually add the milk.  Place over a low heat and stir continually until the mixture thickens.  Take off the heat and beat vigorously then add the butter and stir until it has melted.  Transfer to a cold bowl and cover with a plate and leave to cool completely.

Whisk the 500ml double cream to loose soft peaks (don’t overmix because half of it has to be mixed with the crème patissiere which will thicken it further.

Make the royal icing : Whisk the egg white until frothy then fold in sifted icing sugar until the consistency is that of thick whipped cream.  Whisk for 4-5 minutes until the icing is shiny.  Cover or place in a piping bag.

Place one egg white in a bowl with the sugar then stir over a pan of hot water until the sugar dissolves and the mix is no longer gritty. Using an electric hand whisk – mix the egg white and sugar over the heat until the meringue is thick and standing in soft peaks.  Take off the heat and continue to whisk until the meringue has cooled down to body temperature and when you put your finger in it is neither hot or cold.  In a separate bowl whisk the soft butter with the vanilla until light and creamy then add one large spoonful of meringue at a time to the butter until you achieve a thick, smooth velvety buttercream.

When ready to assemble:

Cut the sponge into three equal layers.  I prefer to turn the sponge upside down and have the uneven top as the base.  Place this on a cake board.

Lay the second layer of sponge over.

On top of the third sponge pile the remainder of the whipped cream (you may want to thicken this a little more by whisking) Pile this onto the top sponge and form a dome.

Pop the whole lot into the freezer for about an hour to firm up.

Take out of the freezer then apply the swiss meringue crumb coat, smoothing it over the dome and down the sides. Pop into the freezer for one to two hours.

Roll out the fondant icing thinly then lay over the crumb coat. Trim with a pizza cutter or knife and decorate using royal icing and any decorations you wish.

This cake is delicious.

TIP : The jam, crème patissiere, swiss meringue buttercream, and royal icing can all be made up to three days in advance so this cake can be made in stages. You could event make it up to and including the crumb coat and freeze then apply the fondant and decorate when required.