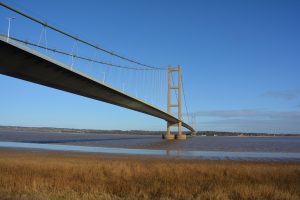 As I am writing this weeks blog –  Mother’s Day, or Mothering Sunday as it used to be referred, is coming to a close.

I always have said to my children that I do not need expensive gifts, restaurant meals or a day out.  I do however like a card and most of all a visit from my children.

So today has been very special indeed.

My son came over with his dog this morning and we had what I would describe as a long, proper walk – starting with a country ramble through mud, fields and along the Humber bank and then something a little more informative.

Barton on Humber I think is a real gem of a town.  It is a small market town but very old and packed with history. This morning our walk took us along the Humber bank, under the iconic Humber Bridge to the old coastguard station which was opened by the ‘Duke of Edinburgh’ in 1880. Alongside are ten original coastguard cottages which in their day had only one washroom for all of the households.

There is a small haven or inlet off the Humber at this point and the West bank had 2 ferry quays for ferries to the North bank of the Humber to Hessle and Hull.

The Waterside Inn, which was close to the old quays, is now a dwelling house but up to the mid 18th Century was the first coaching house where passengers, having crossed the Humber by ferry would  then catch the stagecoach to London.

I had never thought of this – I used to believe one four of horses did the whole voyage but apparently, depending on the terrain, horses would change every 6-10 miles.  I think that is amazing and imagine how many horses would be required and be in circulation at any one time !

Opposite the Waterside Inn is the boatyard which is still in operation today.  We popped in to have a chat with the boat builders who are busy restoring old wooden hulled boats. One in particular is an old schooner – the Elise of London .  We were told the Elise is to be restored to a very high standard by the current owner and will have a copper bottom – the very best available.  We were told on our tour of the boatyard that Nelson had the hulls of his fleet covered with copper below the waterline which made them faster and therefore superior to the Spanish and French Fleets. As an aside that is where the phrase “copper bottom investments” comes from – they are the best.

I could write for some time about our little town – it is the birthplace of Isaac Pitman (for all you shorthand typists out there), and of Chad Varah (founder of the Samaritans), one of the Beano cartoonist and Ted Lewis who wrote Get Carter.

Every town has its history and stories and I love to explore history around where I live rather than head off in the car to go places that the rest of the population have decided to visit on the same day.

The conditions were perfect for a March day – cold, bit breezy but sunny and crisp.

The dogs had an amazing time as two young dogs together always do, then we returned home – removed all the walking gear then warmed up by the fire.  My daughter and her three children then arrived and the house well and truly livened up !

Hot drinks all round then I prepared a quick yet  hearty lunch of rib eye steak, chips, mushrooms, tomatoes and peas followed by bread and butter pudding and custard.  What more could you ask for?

Tim cleared away all the pots then the afternoon was spent chatting, laughing and generally having an easy time of things.

Life is so busy these days that taking time out to do nothing of consequence actually feels like I have done a lot.  Talking to children is important whatever their ages and I am so happy that we can and do talk.

Have a good week readers and thank you x