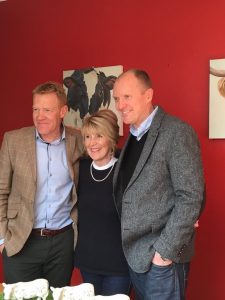 MAKE YOUR BUTCHER YOUR FRIEND

Last September I was invited to front a campaign with Love Food Hate Waste which they entitled Use your Loaf ! – great title.  I thoroughly enjoyed the event and understood much more about the food waste problem in this country and in particular bread.  The LFHW charity focuses on food waste groups and this week they launched their Meaty Issues campaign which is highlighting the problem of meat waste and also the fact that we can do so much more for us and the farmer by buying the less fine cuts of meat which are currently not utilised.

I felt very honoured to be invited to go along this week to Smithfield Market in London to enjoy a two course lunch provided at Smiths of Smithfield (a very trendy restaurant indeed !) and also had the pleasure to meet Adam Henson from BBC’s Countryfile who is fronting this particular campaign.

It was great to see some familiar faces and have the pleasure to meet some new ones too.

Adam opened the event and made an excellent point when he said that as a farmer he is passionate about the wellbeing of his animals – rearing them, keeping them healthy and then being confident that when they enter the food chain they have had the best.  What happens then is the meat is brought to us in our butcher shops and supermarkets and then takes pride of place on the table.  However, sadly and this is something we need to address – we then throw away 34,000 tonnes of beef every year, which is equivalent to 300 million beef burgers or 150 million steaks, according to figures released by Love Food Hate Waste.

Beef is really popular in our kitchens – spaghetti Bolognese was named the country’s favourite beef dish, this was followed by the traditional roast beef dinner and then steak.  However, not everyone gets around to using it up – one in six of us say it has gone to waste as they let it go past the use by date.

This problem has prompted the current campaign launch encouraging us all to think about the meat that we buy, to think about meal planning, freezer utilisation and using up of leftovers.

Whether it is my Yorkshire roots or the fact I was born in the fifties when there were still memories of wartime rations I am not certain but I throw absolutely nothing away.

I do though understand what it is like to work full time, have a growing family to feed and run such a busy life that the back of the fridge only gets a sort out about once a week.  I think when I was younger with the family at home I used to over shop if I’m honest – but children are always hungry and the problem so often is that they are a bit choosey.  When I was a youngster and I said I was hungry it was bread and jam – no crisps, biscuits, yoghurts, sweets etc.

If I say that now I am told that was the dark ages !

I also found out that in Britain we do not make the best use of the less finer cuts of beef.  I am not suggesting for one minute that we try and learn the various cuts but I would urge you to chat to your butcher.  Apparently these cheaper cuts just go into mince and burgers etc but prepared and cooked slowly make absolutely delicious braising joints and casseroles – as I discovered at Smithfield Market.

I realise I am rambling now so I will stop.  As we are on the subject of food waste – I will share with you the recipe that was published by LFHW last year using up stale bread.  It is my moussaka recipe which is made with beef and bread – so it fits the bill.

Have a good week readers and thank you !