Blog Post
Another busy week with LFHW and Countryfile! 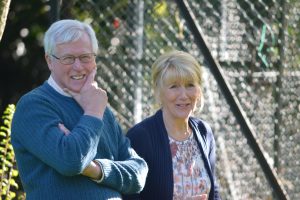 Baking Bread at the Cake and Bake Show

I cannot believe a week has passed so quickly ! Seems only yesterday I was tapping away on the train writing my last blog post.  All the family are due here any time now for a slap up meal – 15 mouths to feed but great fun and chaos at the same time.  I am sure I will start writing then the dog will bark and our first guests will arrive – and yes – dog now barking so will break off and return this evening.

Phew – all gone, pots washed and settled again in front of the computer.

As I mentioned last Sunday, I have been fronting a campaign organised by the national charity Love Food Hate Waste.  I knew I had seen the logo before and realise its on many food items at Tesco.  Brilliant now that supermarkets are embracing the problem of food waste.

The event I was involved with was aptly entitled “Use your Loaf” and I have to admit I am staggered to hear that each day we throw away 24 million slices of bread in the UK.  My role was to share a few tips and ideas to use up stale bread.  If I’m honest the word stale isn’t the best – maybe cooking bread or day old bread but stale just sounds wrong these days.

I had a brilliant time – I served up a three course meal at a “pop-up restaurant” in Borough Market, London.  We had a salad nicoise with black olive croutons then moussaka with a breaded topping followed by a summer pudding terrine.

Each course had cooking bread included as an ingredient and our diners said they loved it.  Since the event I have seen numerous blog posts and newspaper articles as well as radio presenters featuring the LFHW campaign.  Let’s hope I can help to make a difference.

Details of all 3 recipes can be found on www.LoveFoodHateWaste.com

I was back home Tuesday evening just in time to see Hull City beat Swansea at the KC Stadium then Wednesday I decided to set aside as a sort of admin day and a chance to catch up on emails and outstanding phone calls etc.

Then Thursday !!!  – at 8am I had the Countryfile team at my house to do a feature.  All I am able to say at the moment is that I will be seen baking in my kitchen with the legendary John Craven.  What a true gent he is.  The whole crew were such fun and the morning passed quickly and was so pleased the sun shone for our outside work.  I understand 18th October is the date of transmission.

Bake Off – it’s the semi final next week and I think the series has flown by. Last year the whole thing seemed much slower but maybe that’s how it is.  One memory I do recall was meeting up with fellow bakers at the Cake and Bake Show in London between the semi final and final week.  I, along with Luis and Richard were obviously recognised by visitors to the show and that was my first experience of understanding the power of television.  I had envisaged arriving at the show, having a look around as I had other years then settling down to watch a few demonstrations – catch up with the other bakers, having a drink and then heading off home.  Absolutely no chance because our time was consumed by bake-off fans wanting photos and autographs.  What an amazing bunch of people and of course we couldn’t possibly say who had won even though it was everyone’s burning question.

What a difference a year makes – I will be going to the Cake and Bake show in London next Friday but this year I will be on stage !  – amazing.