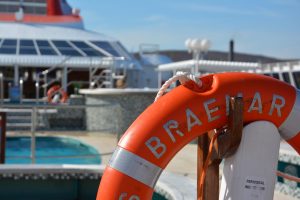 A Surprise Meeting with Olympic Champions

Public and After Dinner Speaking is a skill I have developed

Hi readers – Saturday afternoon.  Firstly, apologies as my blog post is completely out of kilter – it’s almost a week late.  I have a good excuse though –  I have been entertaining  for Fred Olsen Cruises aboard The Braemar on their Great British Cruise.  For the majority of the time I had no signal or WiFi which actually is quite refreshing in some ways.   I had a brilliant time – everything went really well.  The staff are seriously first class in all ways and I have discovered an appetite for cruising in the future.

The cruise began its sail from Southampton and sailed around the British Isles clockwise, arriving back in Southampton 11 days later.   My job on board involved entertaining the passengers during the time the ship was at sea.  I  did a 60 minute demonstration on the Thursday afternoon and a 60 minute Q and A session on the Sunday afternoon.  I am delighted I had a packed house with standing room only both times and my audience gave me some excellent feedback and we had some laughs.

I am able to claim honestly from now on that my Bake Off success has taken me from as far north as Shetland and as far south as Cornwall to the Eden Project – that’s some distance !

On the subject of Bake Off – I am excited that Series 7 is almost upon us.  The bakers’ details have been revealed and soon the excitement will begin again.  I remember two years ago seeing myself for the first time on the television and being quite shocked and disappointed.  I secretly hoped I might look and sound a little like Fiona Bruce but the camera never lies.  Family and friends exclaimed I looked and behaved naturally so I now have to accept I am what I am !

Week 1 is usually Cake and I recall we had to make a Swiss roll for the signature bake and 36 mini British cakes for the Showstopper.  I presented a coffee and hazelnut Swiss roll and then my take on Jaffa Cakes which earned me star baker after coming first in the Technical.  That was my only Star Baker award – apart from ‘The Final’ of course.  My mini Jaffa Orange Cakes always make me smile and I continue to make them regularly – in fact I think I will make more this week as a celebration.  The recipe for them is attached this week if you fancy having a go.

The bakers of Series 5 continue to be great friends – we communicate daily via Whatsapp and have reunions two or three times a year.  There is even a wedding coming up and we are all invited !

There is certainly a buzz in the media this week and I have been involved in various magazine and newspaper articles discussing my win and the experiences that followed.  I am thrilled to have been invited onto BBC Breakfast next Thursday morning to give a resume of Episode One !   I am so looking forward to it – I might even buy a new frock !